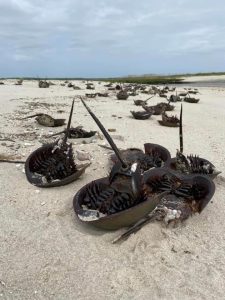 reTURN the Favor (RTF) volunteers have a lot to be proud of as The Wetlands Institute’s horseshoe crab rescue program celebrated its tenth season this year. This dedicated team of horseshoe crab heroes has developed into a key piece of the conservation puzzle, contributing to the recovery of a keystone species in the Delaware Bay.

Although the Delaware Bay hosts the largest concentration of spawning horseshoe crabs in the world, this population has experienced a substantial decline resulting primarily from overharvesting and habitat degradation. Many other species within the local ecosystem are affected by this decline, as horseshoe crab eggs play a significant role in the food web. The horseshoe crab’s most important ecological role is their connection to the survival of migratory shorebirds. 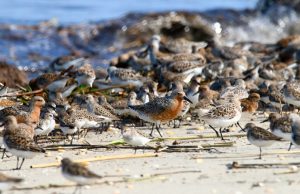 Each May, hundreds of thousands of shorebirds make a stopover on the Delaware Bay beaches on their way from South America to their breeding grounds in the Arctic, timing their two-week rest to coincide with the horseshoe crab’s spawning season. In order to complete the long-distance migration, which can exceed 9,000 miles, shorebirds rely on nutrient-rich horseshoe crab eggs to double their body weight and replenish depleted energy reserves. As the number of horseshoe crabs has plummeted, so have the populations of shorebirds that depend on them, particularly the federally threatened Red Knot.

Changes in the condition of beaches and nearshore habitat have also impacted the population. During typical spawning activity, an estimated 10 percent of the population succumbs as a result of stranding. While coming ashore they can be easily overturned by waves, and are then vulnerable as their soft undersides are exposed to the sun and to predators. It is likely the amount of loss from stranding has increased due to erosion of beaches from rising tides and rougher waters. These erosional conditions create hazards as rubble from past infrastructure is exposed and horseshoe crabs risk becoming trapped.

The RTF program was introduced in 2013 to address these forms of stranding mortality and to bring more awareness to horseshoe crab conservation. Volunteers are trained by conservation professionals to properly rescue overturned and trapped horseshoe crabs that would otherwise succumb to dehydration or predation on eighteen beaches along the Delaware Bay. The program provides each volunteer the opportunity to take direct conservation action by saving the lives of horseshoe crabs one at a time, while the combined effort of all volunteers contributes to the recovery of a keystone species. 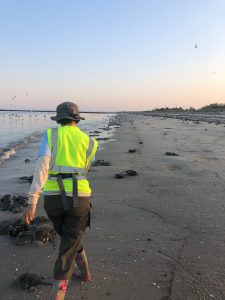 Devoted volunteers go out on the beaches to rescue at all hours, and endure challenging conditions and biting insects to make their rescues. It is labor intensive work, but volunteers agree that the hard work is worth the reward of saving lives and contributing to conservation. RTF also gives volunteers a sense of community as they all share a passion for what they do, and many close friendships have been born out of the program.

In addition to rescuing the crabs, volunteers collect important data to support habitat restoration. Beach restoration along the Delaware Bay has become one of the most significant strategies to protect spawning habitat for horseshoe crabs and foraging habitat for migratory shorebirds. The data collected by RTF volunteers has played a vital role in that work by identifying beaches in need of rubble removal and/or sand replenishment. Program coordinators recently developed an interactive map for biologists and the public to visualize program data, including key hazards and beaches to prioritize restoration projects and effort.

The RTF program has grown significantly in the past decade as its message reaches more people each year. The enthusiasm of the volunteers to spread the word and share their passion as horseshoe crab ambassadors has played a huge role in the growth of the program. In its first year, the program started with six walk leaders, 45 volunteer hours, 43 individual walks, and saved just under 5,000 horseshoe crabs. Those numbers have steadily increased each year, as shown by the same statistics from 2021: 107 walk leaders, 2,605 volunteer hours, 867 individual walks, and almost 153,000 crabs rescued. In total (not including 2022 data) over 840,000 crabs have been saved!

The Wetlands Institute’s partners in this program include the Executive Office of Western Hemisphere Shorebird Reserve Network – Manomet, Conserve Wildlife Foundation of New Jersey, Citizens United for the Maurice River, Friends of Cape May National Wildlife Refuge, The Nature Conservancy, New Jersey Audubon Society, and New Jersey Fish and Wildlife. The program is currently supported by Ocean Wind (An Ørsted and PSEG project) and the Marshall Reynolds Foundation.