This is a live view from the osprey nest about 75 yards outside The Wetlands Institute. Our new high definition camera not only has night vision, it also has sound.  To adjust or mute the sound, hover over the image with your cursor and click the speaker icon.

If the camera feed stops, try refreshing your internet browser.  Storms may cause power outages which will interrupt the feed. The close-up nest camera is prone to outages when demand is high. Unfortunately, we have been unable to resolve that issue so far. We apologize for the inconvenience.

Note: The livecam feeds work best when viewed with Firefox, Microsoft Edge, or Internet Explorer. For Chrome users, be sure to uncheck “Use hardware acceleration when available” in Advanced Settings. The feed also stabilizes in fullscreen view, which you can switch to by clicking the fullscreen icon in the lower right corner of the camera window.

Get updates, see pictures and join the discussion on Facebook. 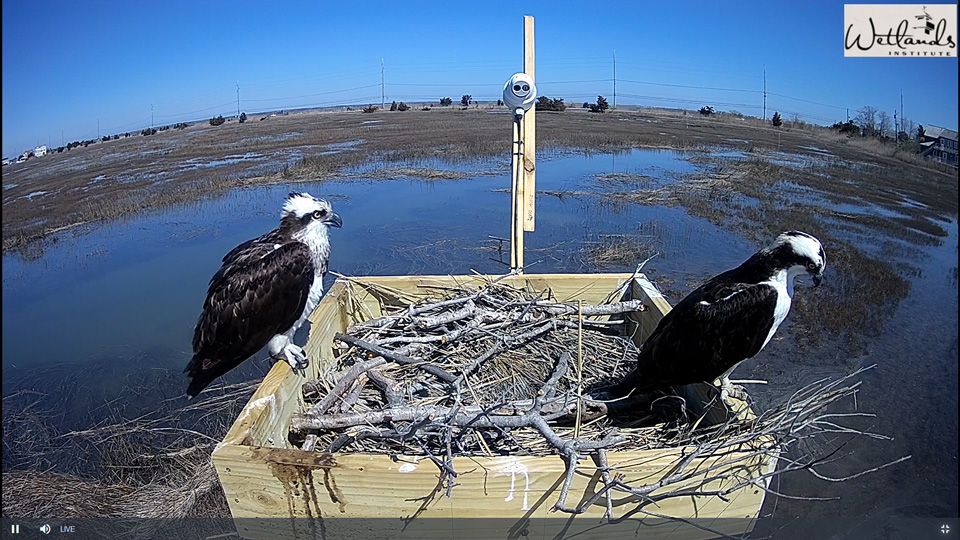 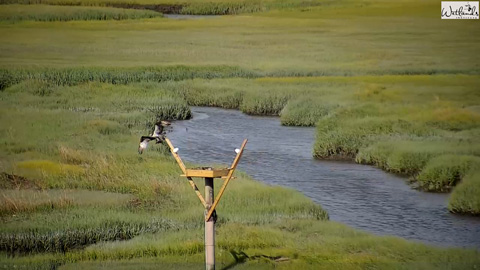 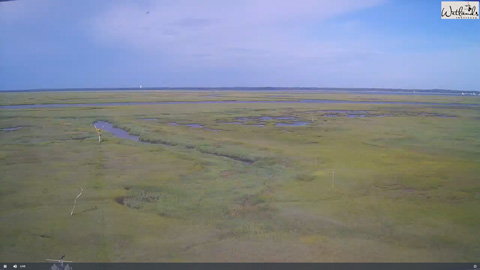 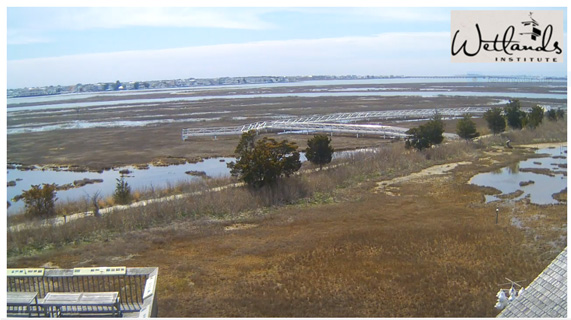 When do the Osprey come back?
Typically, the Osprey return during the mid to late March. The older males arrive first, with females and younger males arriving a couple of weeks later.

Do they mate for life?
Usually. However, research has shown that Osprey are only loyal to their nest, not their mate!

Why is there a platform for them?
Osprey naturally nest in large trees on the edge of the salt marsh. Here at the Jersey Shore, most of that habitat has been developed, so these platforms provide valuable nesting sites.

Why is there human trash in the nest?
Osprey are master decorators, and will constantly add new sticks and other nesting materials to the nest! They will bring whatever they can find in the marsh, which unfortunately often means bringing human trash like plastic bags and beachballs into the nest. Things like monofilament line and balloon strings can get tangled in an Osprey’s legs with disastrous results.

When do they lay eggs?
Eggs are usually laid a couple of weeks after the female’s arrival, in mid-April.

When do they hatch?
Eggs take about 38-42 days to hatch. Typically, this means eggs will hatch in late May or early June!

Do they have any predators?
Adult Osprey are apex predators, and not much will mess with them. However, sometimes an adult Bald Eagle will chase down an Osprey in order to steal its food! Osprey chicks are vulnerable to gulls, owls, and racoons until they learn to fly, so you’ll usually see one of the parents hanging around nearby.

What do they eat?
Fish! An Osprey’s diet is almost entirely fish, earning them their nickname of “fish hawk”. Think you’re good at catching fish with a pole? Try doing it with your feet! Osprey fly overhead and look for fish, then dive in feet-first. Once they’ve caught the fish, they’ll rotate it in their talons so that it’s headfirst, which is more aerodynamic in flight.

How many eggs will they lay?
Osprey will lay anywhere from 1-4 eggs. The exact number depends on the age of the adults and the environment. Young Osprey might only lay 1-2 eggs, whereas more experienced Osprey will lay 3 or even 4 eggs. Sometimes young Osprey pairs might not even lay eggs at all their first year!

When will the young Osprey learn to fly?
Osprey chicks grow up fast. It only takes about eight weeks for Osprey to reach their full size and fledge the nest! Their feathers will come in during June and July, and by late July they’ll be flapping their wings in preparation for flight. Once they can fly, they’ll learn to fish.

Where do they go in the winter?
Starting in late August, Osprey head for warmer areas, from Florida and the Gulf Coast to South America. Males and females migrate separately, and spend the winter apart. Juvenile Osprey will spend an entire year in their wintering habitat before returning north to breed for the first time.

Be a part of the conversation!

All osprey all the time!
Get updates, see pictures and join the osprey discussion on our Osprey Talk Facebook group.