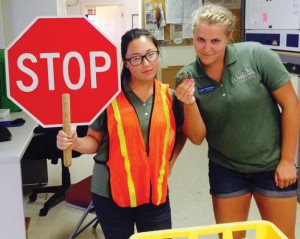 This year marked our 25th year of conducting patrols to save nesting terrapins and document their use of our local roads during the busy nesting and summer tourism seasons. Over these years, we’ve documented roughly 500 terrapins (an average of 492 to be exact) killed annually on our road patrols.

We also save, on average, roughly 275 terrapins from harm on the roads, help numerous injured terrapins, and release over 150 head-started terrapins back to the marsh each year of late. It is incredible to think of where the state the local population would be in without our terrapin conservation program in place.

As a result of construction along our well-worn road patrol route, many aspects of our road patrols changed. Due to the extended closure of the Townsends Inlet Bridge, as well as the construction project along Sea Isle Boulevard, we were forced to alter our route. To help us continue to monitor roads in Sea Isle frequently despite the changes, we had the help of several devoted volunteers.

Collectively, our terrapin team, comprised of staff, interns, volunteers and community friends, tallied 736 terrapin encounters along our local coastal roads during the 2015 nesting season. Over 322 were live animals helped out of harm’s way, and 414 were nesting females killed by vehicles. In addition, we encountered 67 injured females that were either rehabilitated or euthanized, 23 of which have been successfully treated and released. Believe it or not, we saw a lower than average number of road-killed terrapins this year and saved an above average number of turtles from roads. 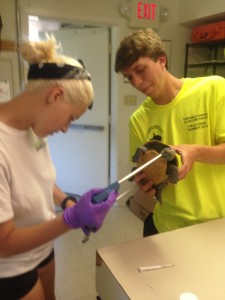 On our property, we tracked terrapin nesting activity by conducting 5 patrols per day, starting in late May. We had assistance from a small troupe of junior volunteers who helped keep a look out for nesting terrapins, and of course visitors, school groups, and summer nature program participants that were fortunate enough to spot nesting terrapins during their tours. Some days there were not enough of us to keep pace with the terrapins.

This year we captured terrapins nesting on our property over 170 times! These included 96 females previously marked with microchips for identification (5 of which were released as headstarters after being incubated and reared in our program) and 77 new (to us) nesting females that we microchipped. We also protected 89 nests with exclosures to keep them safe from predators. Be sure to check them out the next time you visit!