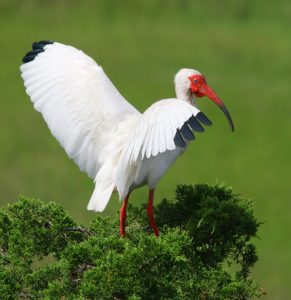 Perhaps you’ve seen them soaring over Seven Mile Island, foraging within the verdant salt marsh grasses, or bathing in the freshwater pools nestled in the Avalon high dunes – exotic white birds, wings fringed in black, reddish bills strongly downcurved from base to tip in a graceful arc, and eyes that rival Sinatra’s. We’ve been fielding calls and messages about them since early spring, some from people who’ve lived in the area for decades. Many are simply looking for an ID, while those who know them wonder why they’re here.

In an area renowned for avian oddities, these are still reasonable questions. White Ibis – for that is what they are – are creatures of the southern coast. Common in wetlands and estuaries from North Carolina to Florida and around the Gulf Coast down through Texas, these long-legged waders were seldom seen this far north, and never in large numbers: Until recently, a single White Ibis in Cape May County was an event of some note, drawing in birders from near and far.

In 2019, everything began to change. That year, people around the county reported sightings of a dozen White Ibis or more at once. A year later, they nested in New Jersey for the first time in the state’s history. The site – a well-known rookery for several other wading bird species (including Great Egrets, Night-Herons, and Glossy Ibis) at the Ocean City Welcome Center – produced four nests, three of which were successful. The Ibis came roaring back in 2021, establishing multiple nests across the rookery, raising at least 43 young, and putting to rest the idea that 2020 was a fluke. 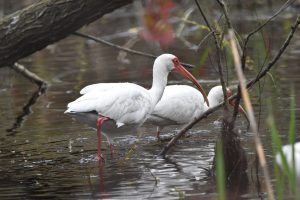 This year, the rookery is once again alive with the raucous squawks of White Ibis – but they’ve also expanded beyond the confines of Ocean City, moving onto Seven Mile Island. While no one’s found a second rookery yet, the birds have been seen by many around Avalon in staggering numbers: upwards of 350 birds foraging in the marshes or roosting in the remnants of native Atlantic maritime forest. Seemingly, the Ibis are finding a home here. The question is, why now?

Range expansion among birds is nothing new. Several species common to the mid-Atlantic or northeast didn’t start out that way: Cardinals and Mockingbirds, Carolina Wrens and Red-bellied Woodpeckers, all pushed north throughout the 20th century. Exploring a new food source, taking advantage of favorably changed conditions, escaping major habitat disruption – all have been put forth as potential explanations, and any one might be behind the White Ibis’ northern charge. The biggest difference is the time frame: while the other expansions played out over decades, White Ibis went from occasional rarities to regular breeders in just a few years. Again, why?
Both habitat and food are ample in the bird’s traditional range; the only factor left that operates at a similar pace to its rapid expansion is climate change. We’ve seen evidence of climate change in the increasingly frequent flooding of the marshes around us, in the intensity of coastal storms and the concomitant damage to our beaches and shorelines; now, through the Ibis, we’re getting a bird’s-eye view of climate change in action.

Using a combination of tens of millions of bird observations and scientifically rigorous climate modeling, the National Audubon Society has created climate change impact projections for nearly 400 North American bird species. Under all warming scenarios, White Ibis experience significant range gains, moving farther north. As they do so, the established residents will have to adjust and make room for these newcomers. If the Ocean City rookery is any example, it can work; right now, there seems to be enough habitat to go around – at least, for most. But some birds who breed there in smaller numbers may be pushed to the fringes or forced out entirely as the White Ibis, in their drive to survive, begin to take advantage of this rapidly changing world.

The Ibis’ story is one of adaptation – and one of the lessons we’ve learned over the last couple of years is that Nature is both adaptable and resilient. The world can adjust to change, as long as we give it the time and space to do so. Whether we choose to or not is entirely up to us. Either way, it’s too late for us to go back – but we still have time to decide how we move forward. At The Wetlands Institute, it’s in our nature to do so using the best science to inform conservation and with respect for all our fellow travelers with whom we share this fragile Earth – and we invite you to join us. With your help, together we can make a difference.

Views From The Tower Summer 2022