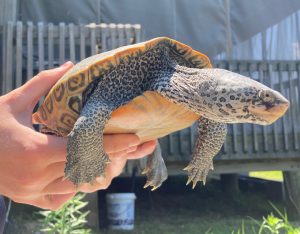 Adult female diamondback terrapin Y2K, recaptured and released after nesting for her fourth time this season. She was tagged as a head-starter in 2000.

The summer of 2021 was another successful year for our terrapin research and conservation program. Although it was the 30th year of our terrapin project, we had many firsts this year. For the first time on record, we had a terrapin lay eggs four times on our property in a single nesting season. Previously, we had thought that terrapins only nested a maximum of three times per season, so this finding is very exciting and suggests that other females may be nesting more than three times per season as well. To add to this excitement, this terrapin, named Y2K and originally tagged in 2000, was a head-starter, a terrapin raised in captivity for a year before being released to the wild. In the 21 years since she was released, we have become very familiar with Y2K over the course of our mark-recapture and telemetry projects, learning more about her nesting habits and her movements during the nesting season.

This year also marks the 25th anniversary of our mark-recapture project, in which we tag terrapins using microchips with unique codes that allow us to identify them when we see them again. Four terrapins were captured this year that were first tagged in 1997, three of which were likely sexually mature and at least 6-8 years old when captured. This means that all of these turtles are at least 30 years old, and the oldest of them may be nearing 40 years old. All of them have been captured multiple times nesting on our property. Terrapins, and other turtles, can reproduce their entire lives, so we hope we will continue to see them each year seeking nest sites on our trail. Terrapins are believed to live 20-40 years in the wild, and we hope to learn more about their maximum lifespan as we continue our research in 2022 and beyond.

Views From The Tower Spring 2022