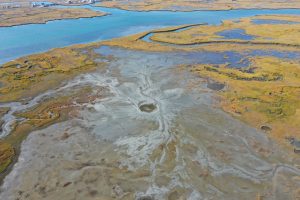 Salt marshes and coastlines are dynamic environments by nature, affected by changes on timescales ranging from hours to years to decades: the stately waltz of the tides; the energetic tango of the ebb and flow of life; the jazzier beat of seasonal storms rolling through; and the punctuated, chaotic staccato of the effects of climate change.

For the past several years, many of these changes have been accelerating – in particular, those driven by human activity – with the onslaught of rapidly rising seas at the forefront of issues affecting our coastal landscape. Seas are rising faster than our marshes can keep pace, marshes are flooding too frequently for marsh-nesting birds to successfully rear their young, and some marshes are converting to tidal mud flats. Make no mistake: climate change isn’t coming, it’s here. This has serious implications for the wetlands and their ability to shield us from storms and serve as a life-support system for fisheries and migratory birds.

In 2019, The Wetlands Institute, the US Army Corp of Engineers, and the NJ Department of Environmental Protection together created the Seven Mile Island Innovation Lab (SMIIL) so that we could take action. Since the Lab’s founding, we have implemented eight projects to restore wetlands, slow wetland loss, and rebuild lost wildlife habitat. Using clean dredged material from the New Jersey Intracoastal Waterway, and through a combination of engineering and natural processes, we’ve been able to treat more than 60 acres of marshes.

In March 2020, SMIIL partners began an elevation enhancement project on Sturgeon Island in Great Sound, which, along with neighboring Gull Island, hosts more than 35 percent of New Jersey’s nesting wading birds – including Great and Snowy Egrets, Little Blue and Tricolored Herons, Black-crowned Night-Herons, and Glossy Ibis. Habitat degradation is affecting nest success, though, and both islands are drowning.

Sturgeon Island became our test bed. We developed several dredging and material placement tools there that we then implemented on both Sturgeon and Gull Islands. On Gull, we placed more than 40,000 cubic yards of material to enhance marsh elevation, restored exceptionally low portions of the island that were devoid of marsh grass, and created sandy marsh edge protection features – an experimental approach to try to prevent breaking waves (largely from boat wakes) from damaging the marsh edge. After two years of monitoring, results are excellent.

The marsh edge feature is effectively intercepting boat-wake waves; bottom-dwelling plants and animals quickly inhabited the newly placed sediment; and we were able to raise the marsh platform at both islands up to three feet in some areas, reversing marsh loss and restoring drowned areas back up to suitable elevations for recovery. Marsh grasses are naturally growing on the dredged materials, increasing marsh area and ensuring the marshes can last for decades to come. Areas of persistent tidal flats have been shallowed and are now hosting thousands of migratory shorebirds as they feed and rest. These results clearly demonstrate the value of beneficial use projects, and they have the potential to create a sea change for our marshes and the wildlife that depend on them.

These are exciting times, and The Wetlands Institute is extremely pleased to take on a leadership role studying, preserving, and conserving these marshes and coastal ecosystems well into the future. To learn more, visit wetlandsinstitute.org/smiil.