A Haven For Weary Wanderers, by Devin Griffiths 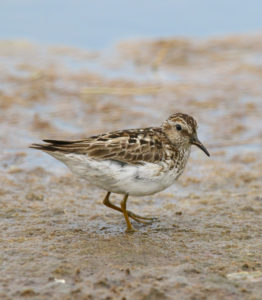 These days around the marsh, there’s change in the air. As I write this, summer has just started to wane, the edges of the light shifting away from the harsh brightness of mid-year towards the more subtle tones of autumn. The Osprey chicks are just shy of fledging, juvenile Yellow-crowned Night-Herons and Barn Swallows explore the marsh on new-minted wings, and a well-timed glance might reveal the inky form of a downy Clapper Rail chick vanishing into the concealing grasses.

Throughout the year, life abounds in the saltmarsh. However, the approaching fall presages the arrival of a family of birds particularly dependent on the marsh’s autumnal bounty, a feathered flood from the far north: shorebirds.

The biannual migration of birds is perhaps nature’s grandest spectacle – and shorebirds its undisputed long-distance champions. Most of the shorebird species that visit us here on the Atlantic Coast breed in the Arctic tundra and spend their winters in South America, some heading to Tierra del Fuego at the extreme southern edge of the continent – a journey of nearly 10,000 miles. Some, like Semipalmated and Least Sandpipers (the world’s smallest shorebird), make non-stop hops of up to 2,500 miles – a considerable feat for birds that weigh less than an ounce. These are marathon migrators, and paragons of endurance.

Which is why areas like our coastal saltmarshes are so critical. The abundance of life contained within the sheltering grasses – this incredible biomass of crustaceans, invertebrates, mollusks, and marsh grass seeds – provides the food these birds need to power their remarkable journeys. And within those grasses, too, is safety, and a chance for much-needed rest.

I walk the marsh most evenings, pausing between the end of the work day and the drive home to breathe deep of the salt air and commune with the birds. Watching them go about their lives grounds me firmly in the moment, and connects me to nature in a way that nothing else does. And it provides a tangible reminder of why we do what we do: Life for a shorebird is hard; without the marsh, it might be impossible. That is reason enough to protect them.