Celebrating a 50-Year Legacy of Research, Conservation and Education 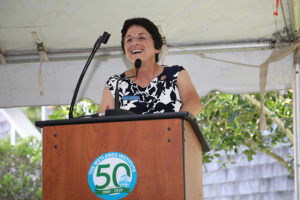 On June 22, 2019 more than 300 of our friends and supporters joined us on a glorious day in celebration of a wonderful milestone – the 50th Anniversary of the founding of your Wetlands Institute. For 50 years, this organization has had remarkable, positive impact in this community. In fact, the vision and perseverance of the founding fathers and the World Wildlife Fund forever changed the heritage of the region. The bold actions they took to preserve these marshes and create an ethic of conservation enabled South Jersey to become a rich and vibrant environment, and placed it in a strong position to remain so.

When Herbert Mills succeeded in masterminding the purchase and permanent protection of more than 5000 acres of coastal marshes here, he tackled head-on the seminal issue of his time: the widespread loss of coastal wetlands to dredging, filling, and development. He understood the value of these wetlands for fisheries, recreation, aesthetics, and coastal resilience. He was a man talking about coastal resilience 45 years before it was a widely recognized benefit. Mills set this institution on a course of research, conservation, and education – one from which it has not deviated.

Mills understood the importance of education and spoke often of the need to connect people with nature so that they would become stewards themselves. He secured these marshes and immediately set upon a course to establish a research and education center here in the marshes, in this community. He intentionally housed research, conservation, and education under one roof – a core competency and distinctive feature of our mission, and an ethic that has served us well. 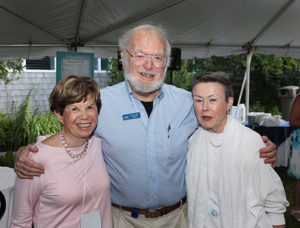 Funds for the land acquisition and construction of our facility came overwhelmingly from private donors – individuals who understood the value of the natural world. Like Mills, they may have been alarmed at the rapid loss of vast tracts of marshes to development. Perhaps they already understood the role that these marshes have for protecting our communities during storm events. Maybe they loved to fish and crab in the back bays and noticed the dramatic changes that were rapidly occurring. Perhaps they achieved a level of calm and peace from looking out over these majestic marshes and took comfort in knowing they could have a role in ensuring they would always be here. Regardless of why so many stepped forward to support the founders of The Wetlands Institute, their actions were no doubt underpinned by the value they saw in the marshes themselves.

We lost Herbert Mills less than five weeks after the dedication of the building – a ceremony presided over by Mills and the Prince of the Netherlands, with more than 500 people in attendance. In the face of that loss, the founding board stepped up and carried on his mission. That founding board was a remarkable collection of great people that included some of the brightest minds in research and conservation nationally. Joe Jacobs was instrumental in documenting the plight and status of Osprey, and was the architect of the nesting platforms that have helped make their recovery one of the great conservation stories of our time. Early work by soon-to-be Institute researchers established the immense biological value of these environments and provided some of the information that was important to the passage of many of the wetlands and tidelands protections that are now in place, forever protecting these critical resources. Work done here helped set the standards for building consensus, developing public–private partnerships, and showcasing the rewards of conservation.

The people who stepped up and led brought bold ideas and addressed emerging challenges head-on. All were responsible for staying true to our mission and creating something amazing. Marion Glaspey led quietly, but make no mistake, she was a great and stabilizing force. Lehigh University managed the Institute from its founding until 1986. Their contributions, and the research conducted here since, provide crucial data to help us continue to tackle the seminal issue of our time, namely changes to these environments from rising seas.

The many people who led the education program have consistently worked diligently to forge strong and interwoven relationships between research and education. Over the years, so many have stepped up and led through their ideas, their support, and their commitment, and all are part of the fabric that make the Institute the organization that it is today. 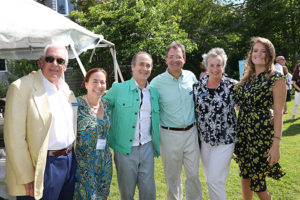 Our celebration on June 22nd was enjoyed by current and former board members, former interns, community partners, scientists and conservation partners, municipal leaders, federal, state and local government representatives, members, and friends. We were excited to have some long-time supporters and friends in attendance. Sallie Oberg, Herbert Mills’s daughter, celebrated with us and introduced her children and grandchildren to her father’s legacy. Former Institute Executive Director Cindy O’Connor was with us. Jennifer Jacobs Zeigler and Roger Jacobs (Joe Jacobs’s children) came from California and North Carolina to participate in the celebration. We heard praise for our accomplishments and future growth from U.S. Congressman Jeff Van Drew, U.S. Army Corp Philadelphia District Commander Lieutenant Colonel Kristen Dahle, and NJDEP Assistant Commissioner Dave Rosenblatt.

When I arrived at The Wetlands Institute, I was charged with reigniting the spark, with realigning the Institute’s mission of research, conservation, and education. Today’s Wetlands Institute is stronger than ever. The staff here is top-notch, making contributions in the fields of wildlife biology, environmental education, and coastal conservation. Our engagement with our partners is strong. We have dramatically expanded the scale and scope of the research and conservation programs here and are dedicating our resources to addressing the most pressing conservation issue of our time – namely the fate of these marshes under the onslaught of rising seas. We are stepping forward – as Herbert Mills did 50 years ago – to understand, steward, and test ways to preserve these marshes, their inhabitants, and our coastal communities. It’s our turn to lead – and we are again stepping up. 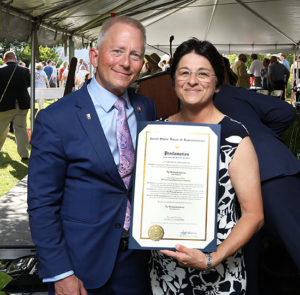