609.368.1211
Click here to read Dr. Tedesco’s article, The Legacy of Ghost Crab Traps
Diamondback terrapins are small, harmless turtles that are only found in salt marshes of the Atlantic and Gulf coasts of the United States.  Throughout much of their range, terrapin numbers have been declining (Mann, 1995; Seigel and Gibons, 1995; Wood, 1997).

Part of the reason for this decline is the increasing use of commercial crab traps — for commercial and recreational purposes — in the same salt marsh creeks and sounds where terrapins dwell.  This is a problem not only in New Jersey but also in other areas where terrapins occur (Bishop, 1993).

Because terrapins are carnivores they are attracted by the bait fish used in commercial crab traps.  As a consequence, terrapins of all sizes (their shells can exceed 8 inches in length in New Jersey) push their way through the entrance funnels of commercial crab traps in order to get at the bait.  Unlike blue crabs, which have gills, terrapins have lungs and are air-breathers, just like people.  Once inside the traps, many terrapins drown.  It has been estimated that a minimum of 14,000 to 15,000 terrapins annually drown in traps set along the New Jersey coast.  Crabbers do not want to catch (or drown) terrapins for two reasons: 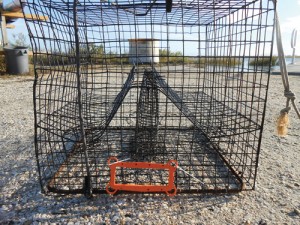 After years of experimentation, researchers at the Wetlands Institute developed a simple, inexpensive and remarkably effective Bycatch Reduction Devices (BRDs) or “terrapin excluder” that can easily be fitted onto the inner (narrow) end of the entrance funnels of commercial crab traps.  Several different designs (stiff wire rectangles with dimensions of 2 x 4 inches or 2 x 6 inches, and a diamond-shaped excluder with a maximum width of 6 inches and a maximum height of 2 inches) were tested by researchers at The Wetlands Institute; personnel from the New Jersey Division of Fish, Game and Wildlife; and even a few commercial crabbers.  These tests have shown that:

In view of all the foregoing facts, a new regulation has gone into effect in New Jersey as of January 1, 1998.  This regulation states that all commercial-style traps used in waters less than 150 feet wide at low tied or in any man-made lagoon must be fitted with devices designed to exclude diamondback terrapins.  These devices may be either rectangular or diamond shaped and no longer than 6 inches wide or 2 inches high.  These devices should be attached across the opening at the narrow end of each funnel entrance.  This regulation is intended to protect an increasingly threatened natural resource—diamondback terrapins—without detrimentally affecting the catch of New Jersey’s crabbers.

The reason that traps fitted with BRDs are only required to be used in certain situations is a reflection of the nonuniform distribution of terrapins in coastal waters.  Terrapin populations are densest in salt marsh creeks and near marsh banks fringing the open waters of sounds and bays.  Terrapins are less abundant in open waters, and are thus somewhat less likely to be caught in crab traps set in these areas.

Moreover, it is the intent of this regulation to require virtually everyone who uses commercial-type traps for recreational purposes (and the best available estimates are that there may be 10,000 or more traps annually used by recreational crabbers in New Jersey) to fit their traps with terrapins BRDs.  (Note: The regulation discussed here pertains only to the use of commercial crab traps.  Crab traps designed solely for recreational use, with sides that flip up when the trap cord is pulled, do not drown terrapins and are not governed by this regulation.