Facing the Winds of Change 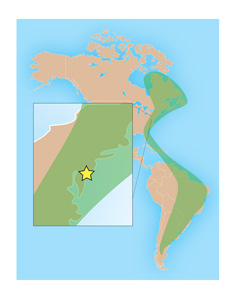 These days, there’s a change in the air. It carries the breath of spring and the promise of warmth, evening light, and renewal. There’s something else, though, and for many it fills the air with a sense of electric anticipation: Spring migration is almost upon us. Birders everywhere are gearing up for one of nature’s great spectacles as millions of migrants set off on their epic journeys—a flood of birds bound for points north. And when this feathered wave breaks, there’s no better place to be than in Cape May.

Cape May’s status among birders is legendary, and for good reason. Sitting squarely in the heart of the Atlantic Flyway, Cape May is a bird magnet. This 10,000-mile long migratory superhighway connects the Canadian Arctic to Tierra del Fuego at the extreme end of South America, and boasts some of the most productive ecosystems in the western hemisphere. Millions of birds migrate along this flyway twice a year, every year. Some, like the Red Knot, traverse its full extent, while others move much shorter distances. The Delaware Bay also plays a role in drawing migrants in, presenting north- and southbound birds with a migratory hurdle. Northbound birds crossing it in spring come to rest at the first land they see—Cape May, at the tip of the New Jersey peninsula. Here, ravenous and exhausted, they refuel and recover. Birds traveling south interrupt their journeys here to gain strength and rebuild fat supplies, waiting for favorable weather conditions to make the crossing and continue on their way. This combination of location and geography makes Cape May a critical stopover. Countless numbers of migrants representing hundreds of species—warblers, raptors, herons, swallows, waterfowl, shorebirds, and others—all descend on the area to rest and feed.

There’s a third factor at play that contributes to Cape May’s biannual avian spectacle. It’s largely responsible for the remarkable density of birds one can find here during migration, but is a bit sobering: habitat loss. Development, recreational use, and the impacts of climate change are dramatically altering the area’s wild lands, leaving less room for the birds that rely on them for shelter and sustenance, and changing the makeup of the habitat that remains. This concentrates more birds into less space, making them more visible but affecting their long-term survival. For birds dealing with the trials of migration, this poses yet another challenge. It has a more pronounced effect, though, on the birds for whom Cape May is the final stop on the migratory journey. Increasing development and sea level rise threaten habitat that breeding birds need to nest and raise their young, putting some of our most familiar birds at risk. The American Black Duck, Eastern Meadowlark, Black Skimmer, American Oystercatcher, Scarlet Tanager, and American Kestrel are all in danger of moderate to severe impact. Even the ubiquitous Laughing Gull isn’t immune: repeated nest-site flooding is causing declines in this common bird. And if we continue on our current trend, most climate projections show the American Goldfinch losing much, if not all, of its breeding habitat. If nothing changes, New Jersey’s state bird could disappear. 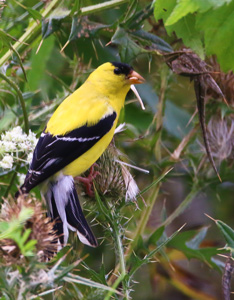 It was concern for situations like this that drove Herbert Mills more than 50 years ago. He knew that unchecked development would devour South Jersey’s salt marshes, and he took action to protect them. Now, the need for protection is greater than ever. Salt marshes, grasslands, shorelines, and forests—and all the creatures who depend on them for survival—are all at risk from changes largely wrought by us. And it’s up to us once again to defend them.

We all have a choice: we can take bold steps now to secure a safe haven for our wild spaces and all who depend on them, or we can look back with regret for the actions we didn’t take. The challenges we face are great, but together we will overcome them. All we need is a clear vision, the drive to see it through, and the wisdom to pass it on.