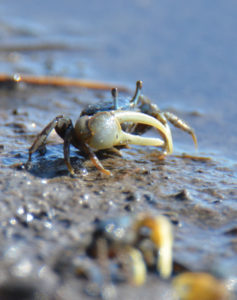 When you walk through the marsh, you have probably noticed small, round holes in the mud that are home to the fiddler crab. Three species of fiddler crabs, Uca pugilator, U. pugnax, and U. minax are found in marshes and estuaries along the Atlantic Coast from Cape Cod to northern Florida. Uca pugnax, the marsh or mud fiddler crab, is the most abundant in New Jersey. Typically found in large groups, fiddler crabs play an important role in the marsh ecosystem. Their burrowing stimulates the turnover and mineralization of nitrogen. However, very high densities of fiddler crabs can undermine the marsh banks with their burrowing. Fiddler crab numbers are kept under control by a variety of predators including terrapins, wading birds, and raccoons.

Males and females can be easily identified by their claws. Males have a greatly enlarged claw, while females do not. These large claws are used in contests for breeding burrows and to attract females. When a mating claw is lost, it is replaced with a small, feeding claw while the remaining claw expands into a new mating claw. The feeding claw brings detritus to the crab’s mouth where detritus is separated from the mud by pumping in water from the gills. Brush-like appendages then harvest the organic material and remaining sediment is deposited on the marsh as pellets.

Next time you visit the marsh, take time to find these crabs and even try to catch some. They are a fascinating member of the marsh ecosystem – and an important one!