From the Marsh to the Forest

When you think of The Wetlands Institute’s research and conservation efforts, you probably think of our work to study and protect our local salt marshes and the animals that inhabit them. However, staff at The Wetlands Institute also work on projects that take them out of our local tidal creeks and into other habitats, such as the maritime forests and freshwater wetlands of the Stone Harbor Bird Sanctuary. Stone Harbor Bird Sanctuary represents some of the last remaining maritime forest habitat on Seven Mile Island, and is home to a variety of wildlife that TWI staff work to study and protect.

The Wetlands Institute has been conducting a long-term mark recapture study on Eastern Box Turtles since 2015. This study is conducted in partnership with Northeast Partners in Amphibian and Reptile Conservation’s Turtle Working Group as part of a regional effort to understand the status of Eastern Box Turtle populations. Turtles captured at the Sanctuary are marked using a technique called notching, where a triangular file is used to gently file a unique series of notches into the side of the turtle’s shell that will allow us to identify the turtle on subsequent encounters. 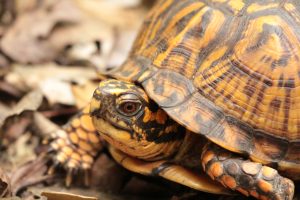 Our results so far suggest the population is skewed toward males. Like Diamondback Terrapins, box turtles have temperature dependent sex determination, with males developing from eggs incubated at cooler temperatures. Much of the nesting habitat for box turtles at the sanctuary is shaded, which may result in cooler nest temperatures leading to more males developing. Our results also suggest that juveniles appear to be particularly abundant, which may bode well for the health of the population. Through this project we continue to learn more about the turtle population at this site, the importance of the Stone Harbor Bird Sanctuary as some of the last remaining natural box turtle habitat on the island, and how patches of habitat can best be managed to ensure a healthy population.
It isn’t all about turtles though! TWI staff also work with amphibians at the Stone Harbor Bird Sanctuary, documenting the species of frogs that occur there by listening for calls during the breeding season, and monitoring tree frog populations at the site. These frogs are monitored by providing artificial refugia that attract the frogs, who naturally seek shelter in dark, humid tree cavities. TWI biologists can easily look into the refugia and detect their presence or absence in a location. 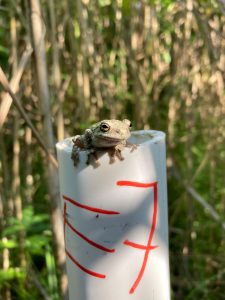 Currently, TWI biologists are tracking the response of the frog population to management of invasive vegetation at Stone Harbor Bird Sanctuary. Paul’s Pond, a freshwater pond surrounded by wetlands at the sanctuary, represents some of the only naturally occurring fresh water on Seven Mile Island, and is an important breeding location for amphibians on the island and an important breeding area for wading birds in years past. Unfortunately, the pond and the wetlands around it have become overgrown with Common Reed (Phragmites australis) and other invasive plant species, reducing its value to breeding birds. TWI and the Borough of Stone Harbor are working with Princeton Hydro to manage this invasive vegetation and return the pond to a more natural state in order to benefit wildlife at the sanctuary. Biologists from TWI have been monitoring the presence and absence of frogs at various locations in the sanctuary, including the area to be managed, and will continue monitoring these areas after management concludes so we can detect any changes in tree frog use of managed areas. Through our continued management and monitoring efforts, The Wetlands Institute is committed to ensuring Stone Harbor Bird Sanctuary remains a valuable habitat for native wildlife.