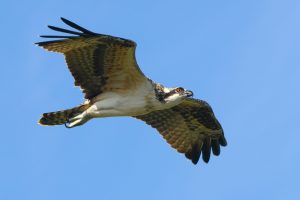 There is perhaps no more iconic salt marsh creature than the Osprey. At two feet long and boasting a wingspan greater than five feet, it is a large, majestic bird. From spring through summer, Ospreys are a constant presence in the marsh, a powerful manifestation of Nature at her most wild.

This wasn’t always the case. Before the 1950s, coastal New Jersey played host to between 450 and 500 Osprey pairs each year, but decades of habitat loss through coastal development and reproductive failures due to rampant use of the pesticide DDT took a heavy toll. By 1974, this one-two punch had eliminated 90 percent of New Jersey’s Osprey population, leaving only 50 nesting pairs and landing the bird on the state Endangered Species List. Throughout North America, the situation was similarly dire: Osprey numbers had plummeted. The species sat on the knife-edge of extinction; one more push could send it into the abyss.

Thankfully, that was not the Osprey’s fate. The dedicated work of conservationists, scientists, attorneys, and a public armed with knowledge of DDT’s perils (largely through Rachel Carson’s groundbreaking Silent Spring), led to the pesticide being banned in 1972. Four years later, Osprey numbers were rising – their recovery fostered by both the removal of DDT from the ecosystem and the construction of artificial nest platforms to replace now scarce natural nest sites. By 1986, there were more than 100 pairs in the state; by 2013, the Osprey population surpassed 500 pairs, exceeding pre-DDT levels for the first time – a remarkable milestone for a bird once on the brink. They continue to flourish today.

This spring, we once again welcomed Ospreys back to the marsh, and witnessed the unfolding lives of these incredible birds. Our camera-equipped platform again hosted a breeding pair, and we watched spellbound as they reunited after six months apart, nested, and raised three young birds – two females, who hatched within a day of each other, and a male who hatched several days later.

The Osprey cam was a constant source of wonder, particularly as the season progressed and the young birds developed and began to experience their world. We watched dynamics emerge. Most often – sibling squabbles aside – there was relative peace on the platform. When it came to food, there was a clear hierarchy: the older chicks were fed first, and they weren’t shy about reminding their younger nest-mate, usually through a few well-placed pecks. However, as long as food was plentiful – and here in the marsh, it often is – everyone ate. Sometimes there was even enough for one more. For a few days this summer, a recent male fledgling from a nearby platform flew in for a meal – much like your neighborhood friend who always managed to show up right when dinner was ready. This new arrival never fazed the mother, who fed it alongside her own young – of course ensuring that hers ate first.

Occasionally, though, drama disrupted the carefully orchestrated harmony. Late this season, after the three resident chicks had fledged but were still returning to the nest to eat, another newly fledged bird showed up – this one a large female. She generally kept her distance from the two resident females, setting her sights instead on the younger, smaller male – stealing fish from him and chasing him off the platform, sometimes holding him down and pecking at his head in an attempt to assert dominance over the platform and the supply of food it represented. This went on for about a week, until the mother bird had enough and put the interloper in her place. Apparently emboldened by this, the young male turned the tables, defending his food and protecting his place on the platform. From that point on, the birds formed an uneasy truce, co-existing under a new dynamic. When the parents head south to spend the winter apart – the mother first, followed in mid-September by the dad – we’ll watch this new dynamic evolve as the young Osprey navigate their marshy world on their own. And we’ll keep an eye on the ongoing antics in their tricky game of survival until they, too, head south on the winds of autumn. 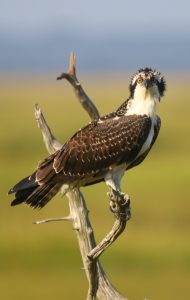 The return of the Osprey is one of conservation’s greatest triumphs, and it’s a story to which The Wetlands Institute is intimately connected. Joe Jacobs – a founding member of our Board of Trustees – spent two decades banding Ospreys and pioneered the use of nesting platforms, putting up many throughout the marshes in Stone Harbor and Avalon. And Herbert Mills, who founded the Institute itself, conducted extensive research on Ospreys, contributing significantly to their recovery.

It’s thanks to these visionaries – and many others like them – that we can thrill to the sight of these magnificent birds soaring on outstretched wings above the marsh, or settling in for another season on the platform to raise a new generation. With so much dire environmental news these days, the Osprey represents a ray of hope, and a welcome reminder of the positive change we can create and what we, together – with foresight, courage, and will – can accomplish.

Views From The Tower Spring 2022