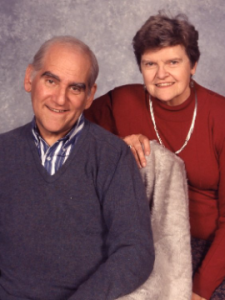 Entering the lecture hall, a little girl looks up from her mother’s neck. She points a tiny, chubby finger at the mobile overhead, and chirps “birds, birds, birds”. Floating above are The Wetlands Institutes’ signature mobiles featuring hand-carved birds commonly spotted on the marsh and nearby shores. They were carved by Dick Eckhardt and donated to the Institute, and have a place of honor in the lecture hall where so many education programs have been offered over the years. The mobiles are just one part of the lasting legacy created by Dick and Barbara Eckhardt, longtime friends, volunteers, and supporters.

The Eckhardts both enjoyed careers in the sciences. Dick was a Lehigh graduate and pursued electrical engineering; Barbara received her degree from Mount Holyoke and worked as a chemist with Pfizer. She enjoyed supporting young scientists, and graciously opened her Avalon home to provide summer housing for Institute interns. Barbara is remembered as strong, smart, and ahead of her time. While Dick’s time with us ended in 2003, it was just last year that we said our final goodbyes to Barbara. Recognizing their aunt’s fondness for the Institute, her family made a tribute gift in her memory and underwrote new trail signs for our property.
Dick and Barbara are remembered on our donor wall as members of the Institute’s Herbert Mills Legacy Society – which recognizes those who share with us their intention to make a gift of any size to The Wetlands Institute in their estate plans. Many people, like Barbara and Dick, choose to make a gift to charity in their will. Recently, we learned that the Eckhardts had elected to make another gift to the Institute: they created a legacy and received both a tax deduction and a lifetime income by naming The Wetlands Institute as the beneficiary of their charitable remainder trust.

For many people, a planned gift is the largest gift to charity they will ever make. Gift planning can assist in honoring a friend or family member with a memorial gift, reducing tax burdens, creating lifetime income, and creating a lasting legacy. If you are interested in planning your gift to the Institute, please contact me at ltedesco@wetlandsinstitute.org.