The Difference of One

ONE student in 1989 from Stockton University, with the mentoring guidance of Dr. Roger C. Wood, made an internship opportunity for herself by collecting road killed diamondback terrapins’ eggs and incubating them. Some of those eggs, undamaged and still viable, hatched and were released in the salt marshes adjacent to the location of the original females. 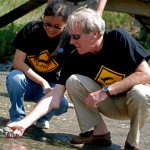 The following year four people were involved. Now it was no longer just one student but a few. They were not all Stockton students, but Wetlands Institute Coastal Conservation Research Program interns, from many different colleges, and Dr. Wood’s concern for local terrapin conservation became the Diamondback Terrapin Recovery Project.

These beginnings have grown into a regionally significant community based conservation program for a range of shore related ecosystems. Students come from all over the United States for the treasured opportunity to walk in the salt marsh muck, collect eggs from the tire eviscerated terrapins, and meet each other, in what has become an increasingly comprehensive group of conservation programs including the Diamondback Terrapin Recovery Project. The project has resulted in studies of nesting behavior, toxicology burdens, incubation parameters, head starting methods, parasite surveys, age estimation techniques, population structure and movement parameters as well as the development of simple, inexpensive and effective terrapin excluders for commercial crab traps.

Local grade school children have raised money to help and have been rewarded with releasing some of those precious eggs that turned into head started terrapins. When newspapers and TV stations seek lighthearted, upbeat news they can count on highlighting baby terrapins with school children.

By the summer of 2000, some 100 college and university students had participated in the Diamondback terrapin recovery project. That summer a new international component was added – the participation of one young fellow from Vietnam. Similar to the one student from Stockton University pioneering the project in 1989 for other US students in subsequent years, our young fellow from Vietnam has opened up the project to the rest of the world. This young fellow’s internship was sponsored by an inspired local turtle conservationist, William Espenshade, with a hope for future collaborations in Vietnam.

Koulang Chey, 2008 Asian Scholar from Cambodia puts bait in a commercial crab trap to capture terrapins for a population study.

What became apparent at the conclusion of the summer of 2000 was that this young fellow from Vietnam now had a step up on understanding community based conservation based on the Wetlands Institute’s model for Diamondback Terrapin conservation. He would bring this understanding back to Vietnam to involve his local community in the conservation of turtle species there. 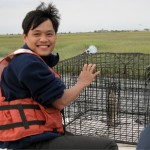 Koulang Chey, 2008 Asian Scholar from Cambodia puts bait in a commercial crab trap to capture terrapins for a population study.

The chance to give other young turtle conservationists exposure to the Wetlands Institute’s model was not lost on William and other like minded individuals who have concerns for turtle conservation local and global. The Asian Scholarship Program was initiated in the fall of 2000 through the New York Turtle and Tortoise Society to sponsor other students from southeast Asia to learn from Dr. Roger Wood’s Terrapin Recovery Project. The Asian Scholarship Program brings young conservation professionals to the United States for an intensive summer of research, workshops, and field trips. In total, 18 researchers from 11 countries (Table 2) have worked with Wetlands Institute research scientists and interns to learn skills that enable them to conserve native wildlife in their home countries.

The New York Turtle and Tortoise Society’s conservation activities and members, illustrated on the Internet by James Van Abbema, have helped increase awareness of turtle conservation threats in Asia in addition to local threats. The “Asian Turtle Crisis” as it has come to be called has received attention and action from more and more conservation organizations. What makes the Asian Scholarship Program so wonderfully unique is that people from Asia, and other areas of the world, are coming to the U.S.A. for the community based conservation programs at the Wetlands Institute. We are bringing young foreign turtle conservationists to the U.S.A. to work on conserving local species, and then taking those skills back home with them. Each international intern sponsored by the New York Turtle and Tortoise Society’s Asian Scholarship Program, promoting the conservation of the increasingly threatened turtles in other parts of the world, then becomes a new ONE.