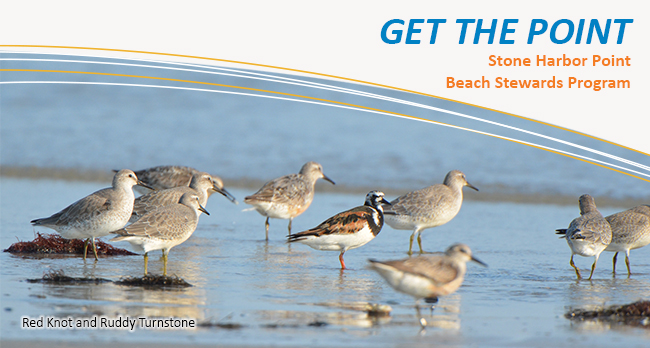 Human disturbance is a major threat to birds and their young on our beaches.

To protect rare and sensitive birds:

• Stay out of protective fencing.
• Never bring dogs or pets to the beach.
• Do not disturb feeding or resting flocks of birds.
• Landing of boats or water craft is prohibited at all times.
• Observe and obey all posted signs.

Piping Plovers, American Oystercatchers, Least Terns, and Black Skimmers nest and raise their young on Stone Harbor Point. Do your part and give them the space they need.

Several species of migratory shorebirds travel thousands of miles to feed and rest on their long journeys between their winter areas in South America and their nesting areas in the Arctic. They arrive hungry and tired and their time here is critical to their survival. Don’t disturb them—it really matters.

CONSERVATION IN ACTION
A project to improve habitat for coastal birds is underway at Stone Harbor Point.  Elevated sandy habitat areas have been created to protect nests from storm flooding and provide safe resting areas for migratory birds. Protection from predators and disturbance are critical aspects of the project.

The views and conclusions contained in this document are those of the authors and should not be interpreted as representing the opinions or policies of the U.S. Government or the National Fish and Wildlife Foundation and its funding sources.

All photos L. Tedesco unless noted. All rights reserved.

The beach restoration phase of a habitat and coastal resiliency project on Stone Harbor Point was successfully completed ahead of the arrival of piping plovers and the onset of nesting of beach nesting birds. The project teams worked tirelessly through incredibly harsh weather conditions that included severe flooding, high winds and several snowstorms.  In the end, more than 50,000 cubic yards of sand were transferred from the southern end of the point near Hereford Inlet to construct elevated habitat areas for beach-nesting and migratory birds.  Sand harvesting removed the upper 2 feet of sand from just above the high tide line and was used to construct three small platforms that are now above spring tide flooding elevations.  The areas are difficult to detect as they only rise a few feet above the surrounding beach elevation and wind and tides have already sculpted them into a natural-looking beach feature.  The project also enhanced an existing dune to provide protection to the community from southerly approaching storms.  The dune crosses the access road and has been constructed to continue to allow permitted vehicles access to Stone Harbor Point for emergency access, patrols and seasonal fishing. Access to Stone Harbor Point was reopened on March 12th.

Project updates and additional information can be found at:

June 17, 2014 – Stone Harbor, NJ — In an announcement Monday June 16, New Jersey Audubon was awarded $1,280,000 from the U.S. Department of Interior’s National Fish and Wildlife Foundation Hurricane Sandy Coastal Resiliency Grant Program to work in partnership with Niles and Associates, the Wetlands Institute, Conserve Wildlife Foundation of New Jersey, the New Jersey Division of Fish and Wildlife, Stockton University and the Borough of Stone Harbor to restore and enhance beaches at Stone Harbor Point that will increase available quality habitat for migratory and beach nesting birds and coastal resiliency for the Borough and its residents.

Stone Harbor Point, an Atlantic coast barrier island in Cape May County, is situated at the southernmost end of Seven-Mile Island and designated as a “Protected Area” to be managed for threatened birds and their habitats.  Stone Harbor Point provides a protective barrier to the Borough of Stone Harbor from damaging coastal storms and sea level rise.  The Point is also favored by residents and visitors for recreational activities, including fishing, bird watching, photography, walking, and jogging.

Dr. David Mizrahi, Vice-president for Research and Monitoring, New Jersey Audubon explained, “In coastal regions, wildlife and people often must share the land.  This project will demonstrate how efforts to improve habitat for wildlife populations also can provide benefits to human populations at the same time.”

Stone Harbor Point is a highly dynamic coastal site that experiences changes in length, width, and height on an annual basis and is one of a few unimproved inlets along the New Jersey and mid-Atlantic coastline.  Early successional beaches provide critical habitat for many species of birds to nest, roost, and forage, including Red Knot, Piping Plover and American Oystercatcher.

In announcing the funding, U.S. Congressman Frank A. LoBiondo (NJ-02) stated, “It has long been known that South Jersey’s environmental treasures support critical fishing and oystering industries, provide vital habitats for wildlife such as the Red Knots, and serve as a natural buffer to protect residents and businesses from storm surges. Restoring and strengthening wetlands and marshes post-Sandy will help minimize future storm damage while promoting the economic livelihoods dependent on our region’s physical attractions.”

In a state with 127 miles of Atlantic coastline and 99% of its population living in coastal counties (US Census Bureau 2012), coastal resiliency strategies are critical to the welfare of the state and its people. This is particularly true in southern New Jersey, where the tourism-based economy is tightly linked to coastal systems and the threat of sea level rise ranks among the highest in the country.

Beach renourishment projects are an ongoing priority along the entire coast of New Jersey because of risks posed to communities by coastal storms and sea level rise.  The U.S. Army Corp’s renourishment plans for Seven Mile Island communities, including Stone Harbor and Avalon, do not include Stone Harbor Point.  However, sand from renourishment activities further north on Seven Mile Island provide a continual resupply of sand to the Point through southerly longshore drift. This ensures a long-term supply of sand for restoration. Sand harvesting will be used to build elevation and improve habitat quality for coastal birds and reduce coastal flooding for residents of the Point.

“This project is of critical importance to migratory shorebirds that stop in southern New Jersey during migration and will compliment Delaware Bayshore restoration efforts,” said Dr. Larry Niles of Niles and Associates, LLC.

Because materials are present locally, the source of sand is sustainable and the cost for sand acquisition and transport will be greatly reduced. Project monitoring will enable documentation of any biological impacts of sand harvesting on intertidal invertebrate communities to determine if this method is an ecologically sound approach for protected wildlife areas.  This data will help to inform future restoration projects.

Eric Stiles, President and CEO of New Jersey Audubon concluded, “New Jersey Audubon is excited about the opportunity to work together with our partners on this critical project.  We believe the outcomes will serve as a model for coastal restoration projects throughout the region.”