The beaches of Seven Mile Island are beautiful beaches. Characterized by tall dunes, shells galore, and nice swimming opportunities, they are attractive to people as well as many species of nesting birds. We are lucky to share our beaches with some of the most charismatic birds on the Atlantic Coast.

Several sensitive species nest on our beaches every summer. Among them are the Piping Plover, American Oystercatcher, Least Tern, and Black Skimmer. Stone Harbor Point is a favored place for them and they rely on the wide open areas with good shell cover. There are few undeveloped beaches left for these birds to nest, so sharing the beach with them helps ensure their survival. 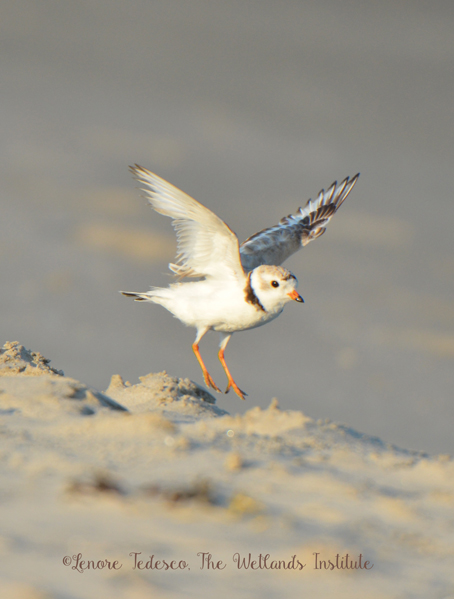 Piping Plovers, Endangered in New Jersey and federally listed as “Threatened” under the Endangered Species Act, are the color of sand and perfectly adapted to Atlantic Coast beaches. The American Oystercatcher is a large, charismatic shorebird, with an unmistakable long orange bill and an incessant penchant for arguing loudly with its neighbors. Least Terns feed by diving at high speeds for fish. During the breeding season (May-August), Least Terns use fish to “propose” to their mate. If the female accepts the fish presented by the male, the pair mates for the season, sharing in incubation and defense duties of their nest. Least Terns are listed as Endangered in New Jersey. Black Skimmers, large black and white birds with orange and black bills, nest in colonies, often with Least and Common Terns. They use their unique bill like a spoon, skimming along the surface of the water with their lower jaw open to catch any fish or other prey. Black Skimmers are considered Endangered in New Jersey.

Beach-nesting birds face many hazards. Their breeding period (May-August) coincides with the busy summer season. Human disturbance and predation negatively impact breeding success. Many predators in our area have abnormally high populations partially due to human activity. They include free-roaming cats, raccoons, foxes, and skunks. Up to 50% of nests are lost to predation each year. Rising sea level is also putting nests at risk to flooding.

The Wetlands Institute, along with many others, work hard to ensure the continued success of our resident beach-nesting bird species. String-and-post fencing is placed around nesting areas closing the area to people to prevent nests and young from being disturbed. Shorebird Stewards at Stone Harbor Point talk to people about beach-nesting birds. Researchers study, monitor, and conserve the birds through management every day all summer long. 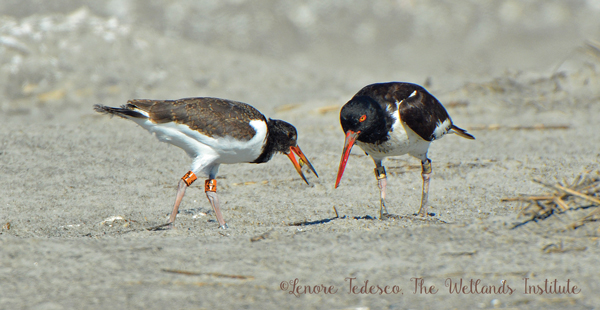 The Boroughs of Stone Harbor and Avalon assist with management and conservation efforts. Stone Harbor Point is a designated conservation area, and restrictions are in place to protect sensitive species. You can help by respecting special rules especially not trespassing in closed areas and never bringing a dog to Stone Harbor Point. Support efforts to ensure that these spectacular birds continue to have a home on Seven Mile Island. You can learn more about them by talking to the Shorebird Stewards at Stone Harbor Point or join tours given by The Wetlands Institute. As you bring your family to the beach this summer, remember how fortunate we are to share the beaches with many wildlife also trying to spend family time at the beach!