by Daniel Klem, TWI Honorary Board Member and author of Solid Air, Invisible Killer: Saving Billions of Birds from Windows 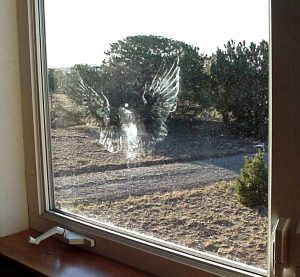 Feather dust imprint of a bird strike against a window

Imagine an invisible barrier placed along a busy thoroughfare, indiscriminately killing millions each year. Old and young, healthy and frail, all going about their lives, all equally at risk and none aware of the danger.

Sadly, many birds find themselves in exactly this situation. Year after year, vast numbers across multiple species die colliding with such an obstacle. The culprit? Glass.

Though useful and attractive in homes and buildings, sheet glass windows pose a serious threat to birds everywhere. Clear windows act as mirrors, presenting birds with realistic reflections of habitat and sky. They see only open landscapes, and fail to recognize the danger until it’s too late. Many fly into panes of glass trying to reach the vistas beyond, injuring themselves or losing their lives as a result. You may have heard the sickening thud of a bird strike yourself, or found one dead on the ground beneath a window, another victim of this tragic – and largely unreported – circumstance.

During migration, when larger numbers of birds are on the move, window strikes garner some attention because they’re more obvious and dramatic. However, many scientific studies have revealed that birds hit windows year-round, at any time of day and during all types of weather.

These strikes exact a heavy toll: in the United States alone, between 365 million and one billion birds die in window collisions each year – the vast majority involving homes and low- to medium-rise buildings (less than 11 stories tall). We are all outraged at environmental disasters like oil spills, but it would take multiple hundreds of Deepwater Horizon accidents to match even the low end of casualties wrought by our seemingly innocuous windows. And even though this calamity is well documented, few people are taking action to address it.

The good news is that this is a problem we can do something about. It requires a variety of solutions on multiple scales, but every one of us can play a part. For new construction and remodeling projects, traditional windows can be replaced with bird-safe glass. This features artistic etching visible to both birds and people or ultraviolet patterns that are invisible to us but glow like warning signals to the birds, protecting them while still offering an unobstructed view. Ask your architect or look into them yourself and request the change. 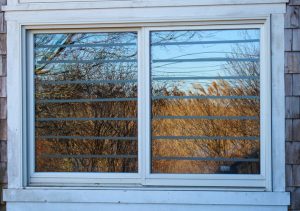 Window at The Wetlands Institute with bird tape applied

There are many things you can do at home as well. Several companies offer inexpensive products – from bird tape to easy-cling decals – that break up reflections and make windows more visible to birds, helping avoid fatal collisions. These can be easily applied to the outside of your windows, and are removable should you need to replace them. The Wetlands Institute uses tape on its windows where reflections are problematic, and has seen a dramatic decrease in strikes. Outdoor window screens also protect birds, softening impact against the glass. In addition, placing feeders within three feet of your house can save birds from an unfortunate end: at that distance, birds can’t build up enough momentum to harm themselves if they brush up against your windows.

By taking a few simple steps to make our homes safer for birds, by speaking up on their behalf and insisting that architects, developers, and contractors incorporate bird-safe glass in their creations, we can turn this terrible tragedy into an uplifting environmental success story. We have the power and the means to build a better, kinder world for these marvelous creatures. All we need now is the will.

How You Can Help

*Available at The Wetlands Institute or online: