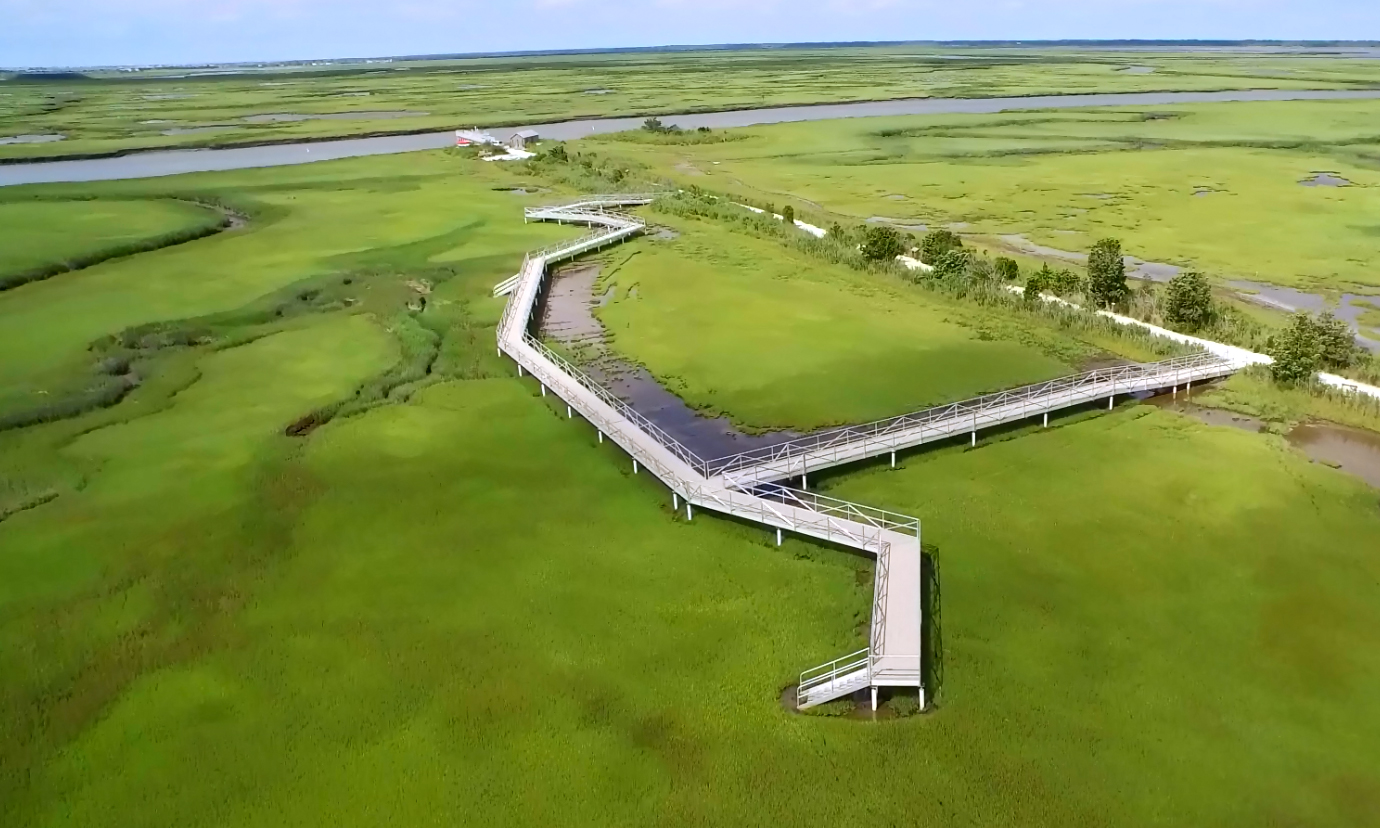 Plans for a new elevated walkway began after destruction of the old wooden walkway during Hurricane Sandy in October 2012. Reconstruction was an opportunity to rethink the possibilities for the walkway and reposition it for improved access to the marsh for both research and education. Construction was completed over the winter and early spring 2014 and the walkway opened to the public in mid-May. We scheduled winter construction to cause minimum impact to marsh grasses that are dormant through the winter, to avoid disturbance to birds and animals that use the marsh during migration stopovers, and to eliminate impact on nesting Osprey.

The walkway is a 720 foot long loop with an extension for better viewing of the front salt panne. It stands 4 feet above the marsh at its base and is 6 feet wide. Aluminum railings line the elevated walkway, ramps, and stairways for safety. Two sets of stairs allow restricted access for Institute personnel leading research and education programs. Research and education stations provide improved access to the marsh for biological and environmental sampling and hands-on learning opportunities.  During Institute business hours, the walkway can be accessed by ADA compliant ramps at two locations from the Institute’s shelled nature trail.

The walkway design and construction were carefully conceived to provide access to the marsh for visitors to learn about the wetlands without impacting the fragile ecosystem. It was also designed to be more resilient to storms and rising sea level – two important considerations. It is sustainably constructed using state-of-the-art methods, and utilized local contractors and locally sourced material to the extent possible. The walkway employs a steel helical pile construction. Piles were cork-screwed into the marsh and extended on average 30 feet below the marsh surface until they reached a lower compact sand layer.

The main walkway structure was locally fabricated and is aluminum. Its grated surface is polycarbonate and is specially designed to allow sunlight and rainwater to reach the plants and animals below and reduce the overall impact to the marsh.  Since water can flow through this surface, the walkway has a better chance at surviving major flooding events and storms. Because the entire structure is metal with polycarbonate, there is no lift associated with flooding, making likelihood of damage during rising water levels in storms less. If ever necessary, the entire structure can be recycled.

All work on the marsh required the use of matting to distribute the weight of heavy equipment and prevent rutting. Decking was installed in 40 foot prefabricated sections to increase the speed of installation and decrease time on the marsh. Nearly 90 – 2 7/8” helical steel pilings were installed for a small footprint and strong hold in the marsh. Surveys and boring tests of the marsh were conducted in advance to determine piling locations and elevations.

The costs of the new walkway were covered in part by a FEMA Disaster grant following the destruction of our previous walkway during Hurricane Sandy in October 2012. Remaining costs were funded through donations.

All necessary permits were obtained and all conditions of the permits were met. Pilings were in place before March 15, as a condition of NJDEP permits. The old boardwalk was removed in early 2014, also as per permit. 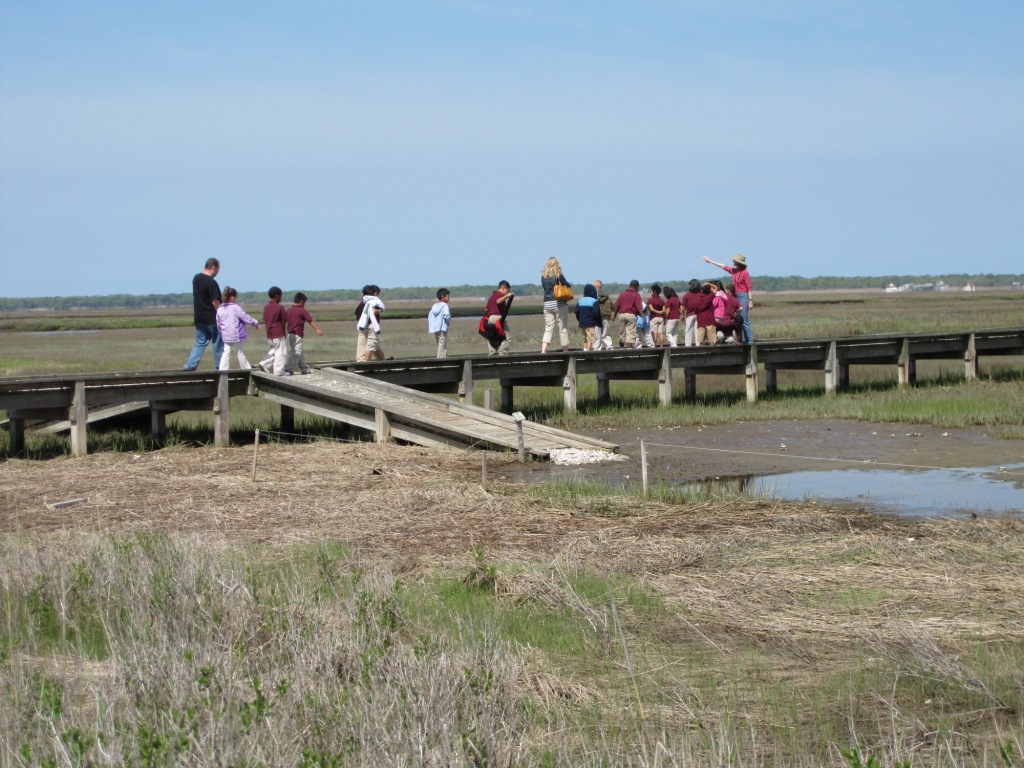 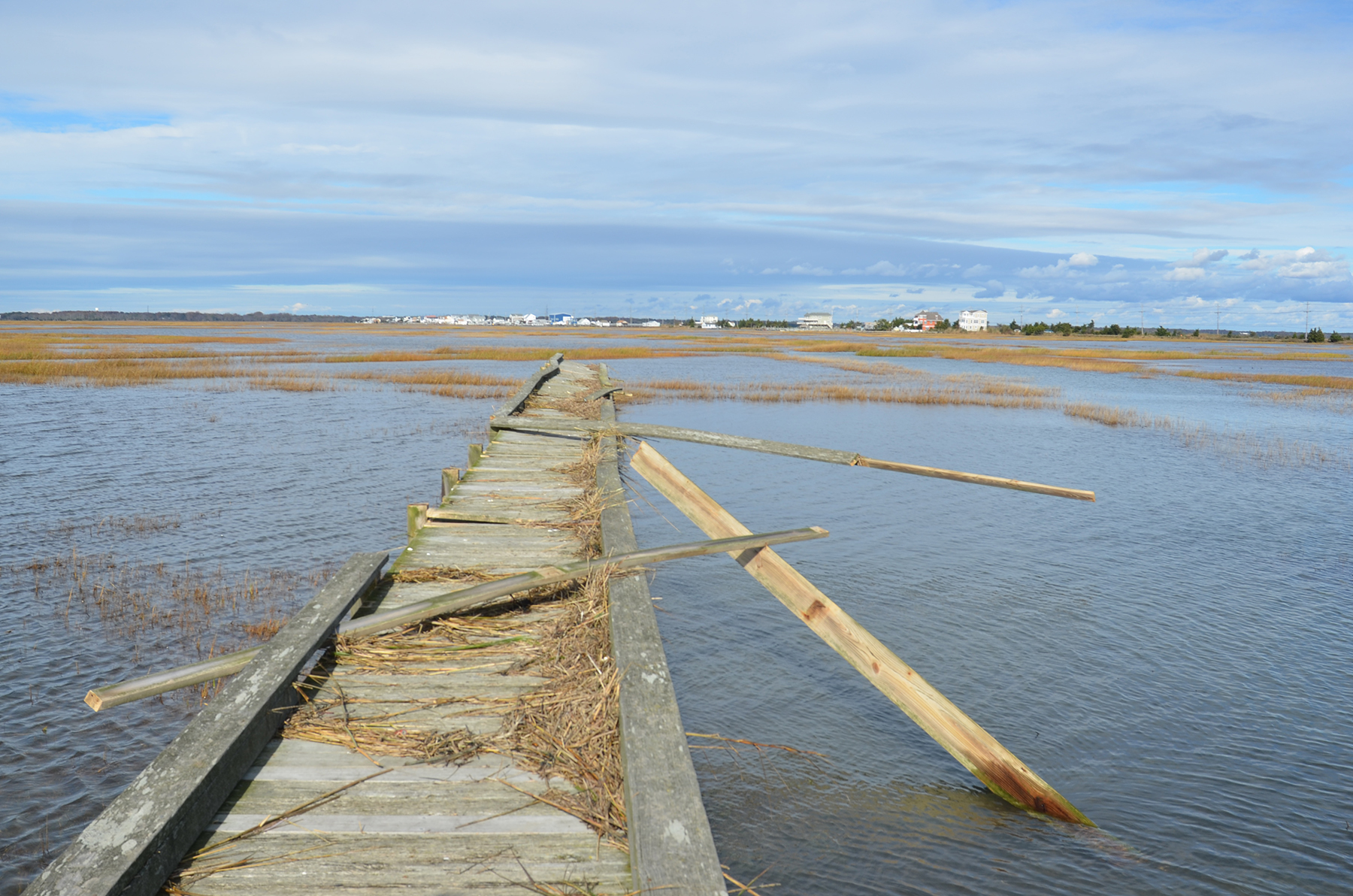 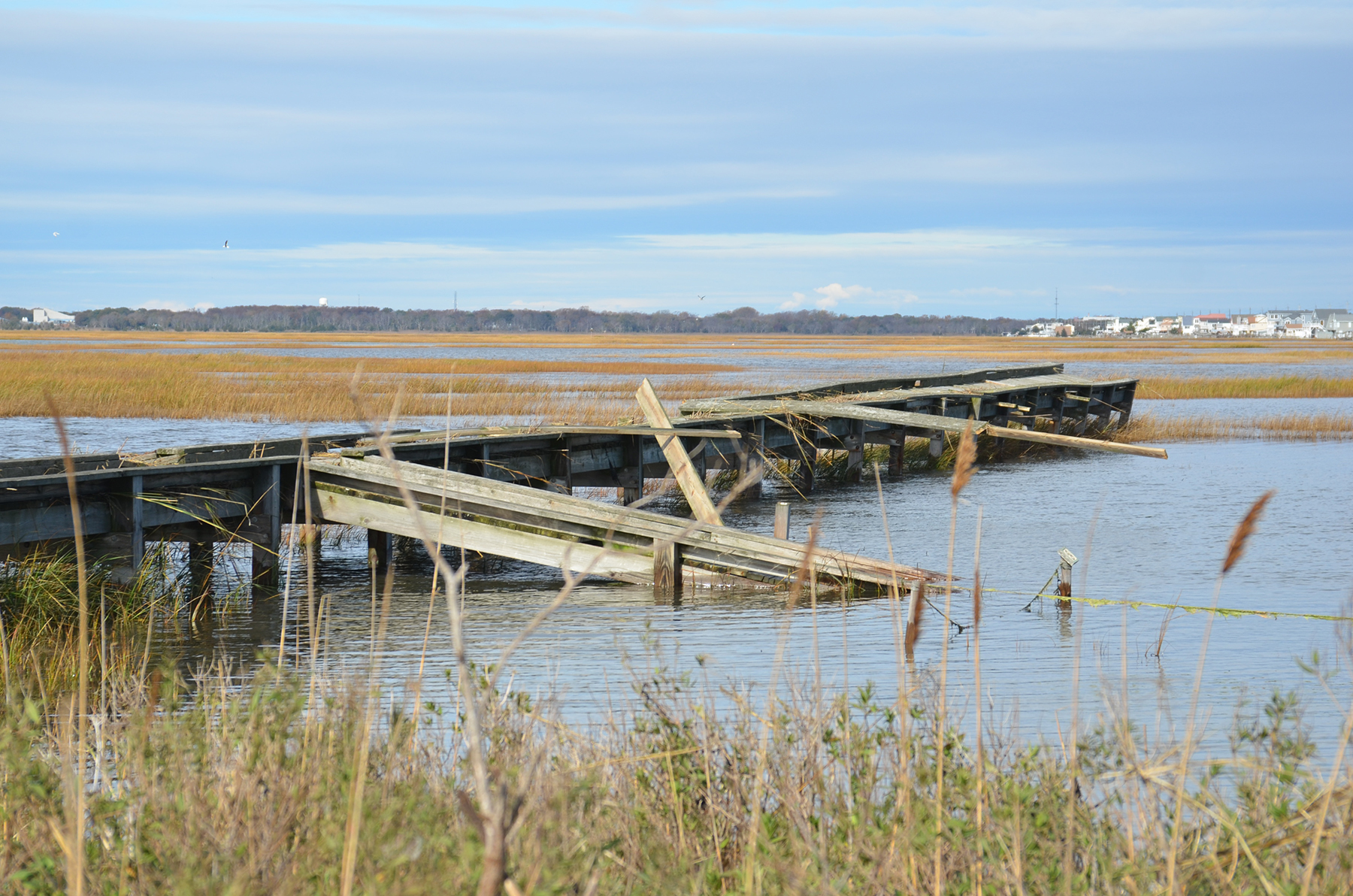 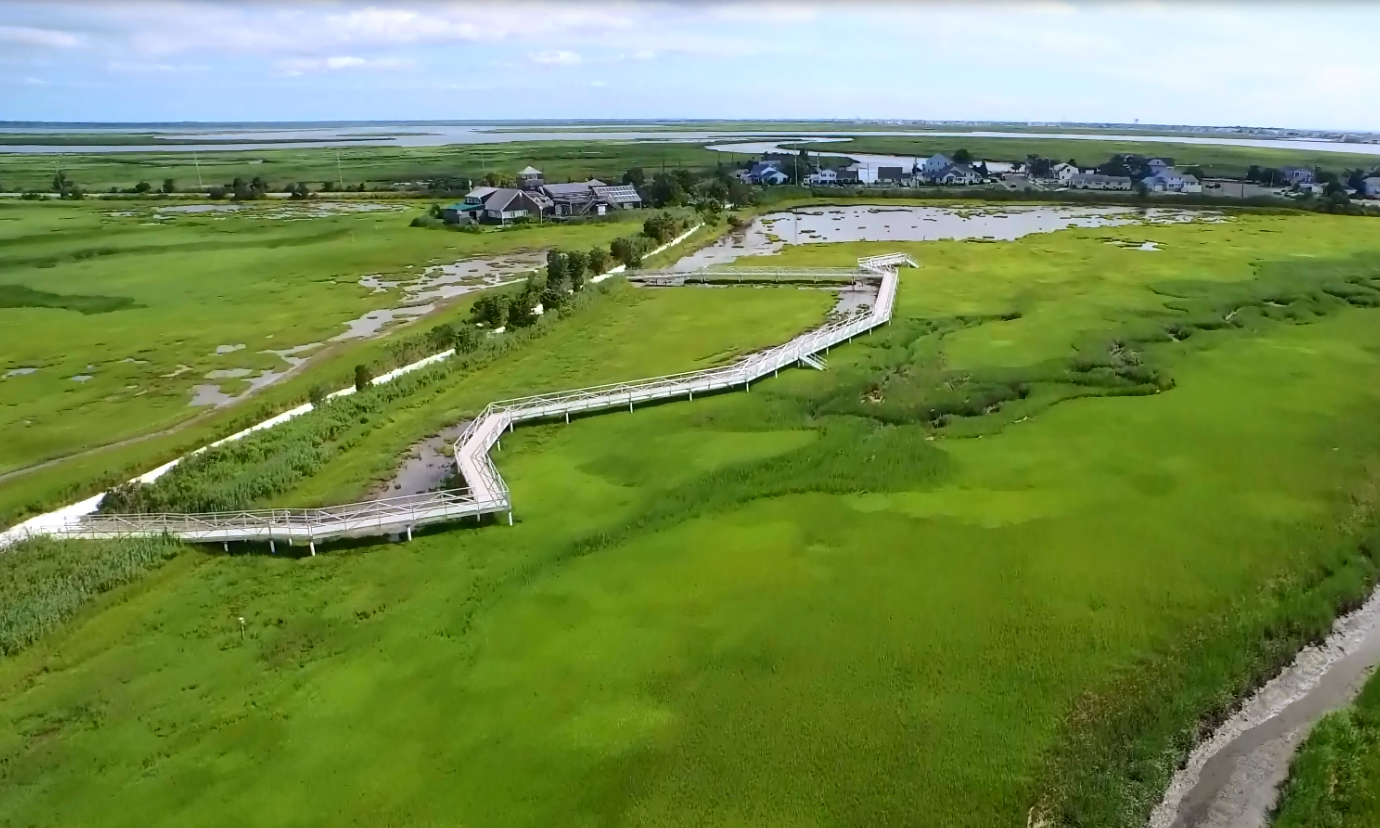 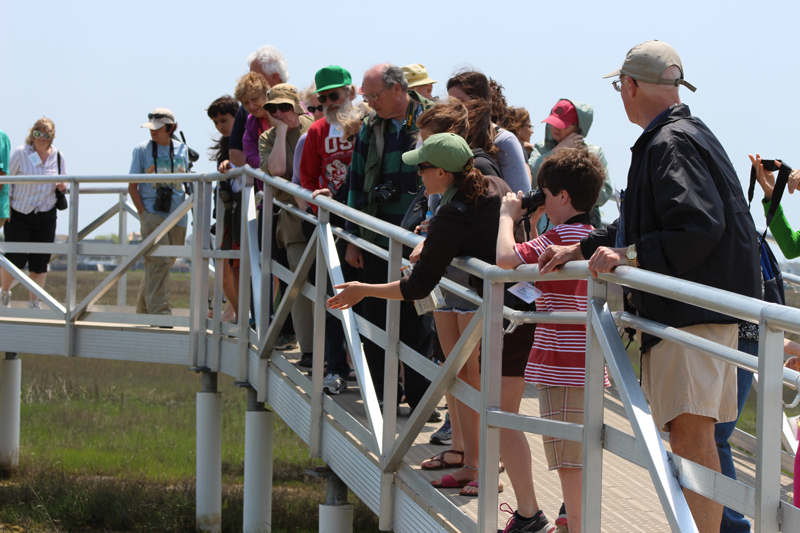 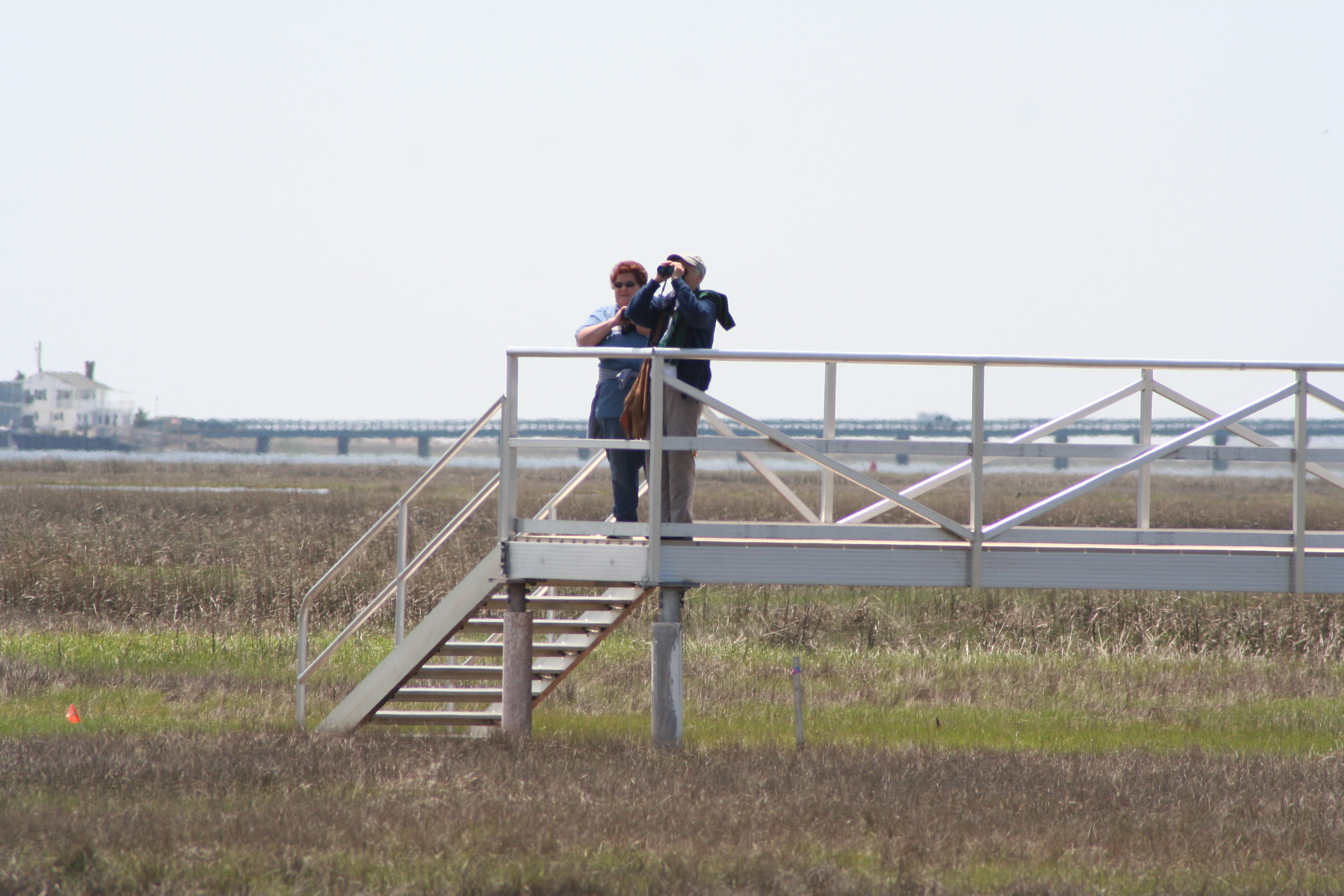