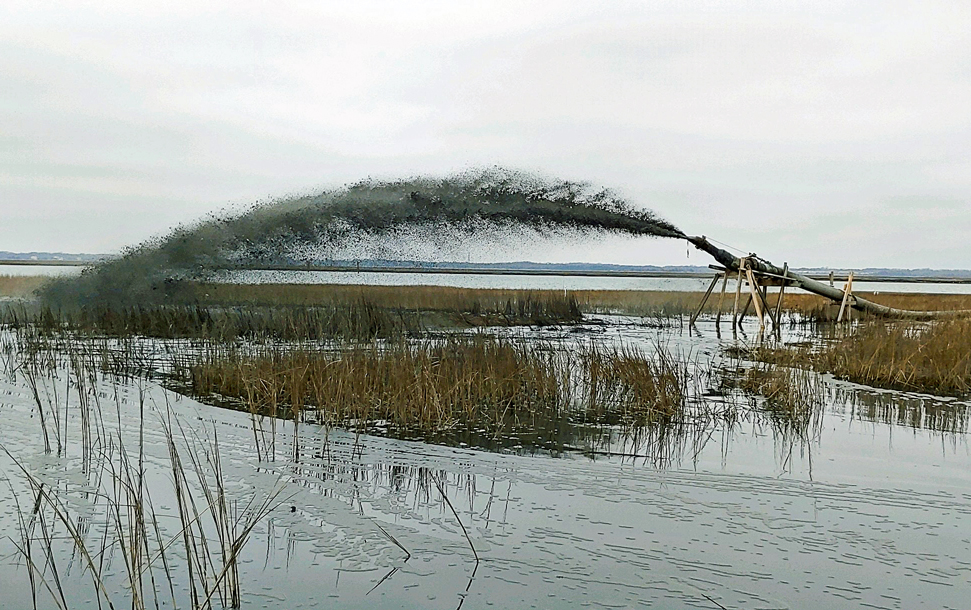 As we have reported in the past, TWI is part of a partnership with the U.S. Army Corps of Engineers (USACE) Philadelphia District, the New Jersey Department of Environmental Protection, and the USACE Engineer Research and Development Center (ERDC) that has developed the Seven Mile Island Innovation Lab (SMIIL). The Lab is a groundbreaking initiative to improve dredging technologies and advance the restoration of New Jersey’s coastal marshes through the beneficial use of dredged materials.

Sturgeon Island is a 13½ acre marsh island owned by The Wetlands Institute that lies in the coastal bays behind Seven Mile Island. It, along with adjacent Gull Island, received material from dredging operations conducted prior to 1970. Vegetation growth on these higher dredge placement sites provides habitat for many colonial nesting species, such as Black-crowned Night-Heron, Glossy Ibis, Great Egret, Little Blue Heron, and Snowy Egret. In fact, more than 25 percent of the wading birds in the state nest on these two islands. Six of the species are considered priority Species of Greatest Conservation Need and one – the Black-crowned Night-Heron – is listed as a state threatened species.

Over the past several years, there have been declines in both habitat suitability and availability at Sturgeon Island, resulting in declining nest success overall and the outright loss of one nesting species from the island. The SMIIL team identified open pools and areas of low marsh on the north portion of Sturgeon Island for elevation enhancement. The goals are: restore a failing marsh; build marsh elevation in some areas high enough to allow for the growth of the birds’ favored shrubby nesting habitat; keep nest sites above the level of most storm-induced flooding; and stabilize the island so it can continue to provide protection to Seven Mile Island.

This winter, restoration work began at Sturgeon Island using material dredged from the NJ Intracoastal Waterway (NJIWW). The focus for the first phase was testing innovative dredge material management approaches. Given the small island size and low island elevations, new approaches to material placement were needed. Habitat restoration work requires fine scale placement of material, but most dredge pumping operations are high-powered and difficult to control in small areas. We worked to develop new tools that can separate sand from mud, redirect material placement during pumping without the need to break down and move systems, slow down material flows, and utilize natural island features to manage dewatering challenges.

This fall, the team is planning to employ the techniques developed at Sturgeon Island over the winter to continue to build island elevation and habitat. The team is also in the planning phases for a fall project at neighboring Gull Island that also will utilize material from the NJIWW. Project teams from TWI are monitoring nesting at both Gull and Sturgeon Islands, ERDC scientists are monitoring island response to material placement, and several instrument platforms are being developed to provide information for Gull Island Project design. TWI is serving as a field station for research teams and providing expertise on area wetlands, sediment dynamics, and beneficial use of dredge materials.

It’s an exciting time in our back bays and we are so pleased that we managed to get some work done before COVID restrictions ended the field season.

Views From The Tower Summer 2020