Cape Study Could Save World’s Frogs 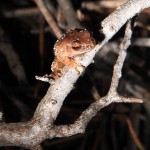 MIDDLE TOWNSHIP – David Golden gently plucked a chorus frog from a still pond at the Lizard Tail Swamp and Preserve and grinned as it tried to wriggle away.

Golden, 39, of Lower Township, is a principal zoologist with the state Department of Environmental Protection. He is leading a study in New Jersey this year that could help explain why frogs are dying across much of the globe – from the cloud forests of Costa Rica to the rainforests of Australia and some vernal ponds in the United States.

Frogs, toads and salamanders face a wide range of problems, from toxic chemicals they absorb through their skin to possible exposure to more ultraviolet radiation from the thinning ozone layer.

But researchers are focusing their attention on a type of fungus called chytrid that is proving deadly to countless species of frogs.

“Some of the research suggests the global pet trade is responsible for spreading the fungus,” Golden said.

Clad in waders against the pond’s spring cold, Golden shined his headlamp in the direction of the frog sounds. After years of experience, he can pinpoint them in seconds despite the vastness of the pond and the disorienting calls that carry across this former sand pit, now a state preserve.

Golden caught spring peepers, leopard frogs, cricket frogs and bullfrogs with his bare hands. He swabbed the bellies and backs of each with a cotton swab he put in a plastic vial.

He released the tree frogs back into the marsh but first took a tiny clipping of skin from the larger leopard frogs and bullfrogs for additional study.  All around him the frogs called out in a deafening chorus of chirps, buzzes and croaks.

“This pond isn’t so bad, but in some where they’re concentrated, my ears are ringing,” he said.

Golden has been catching frogs his entire life, first as a child for fun and now for a living with the DEP. He authored several field guides, including one on reptiles and amphibians.

Golden said researchers have already found the fungus in New Jersey but are now trying to determine how widespread it is and what effect it is having on frog numbers.

The study is sponsored by Montclair State University and the Conserve Wildlife Foundation of New Jersey.

“The extinction rate of these amphibians is 200 times the background rate (the rate at which all species eventually go extinct),” said Karena DiLeo, an assistant biologist with the foundation who is participating in the project.  “The fungus eats the keratin in the adult frogs. It eliminates the frog’s ability to prevent dehydration,” she said.

The damaged cells dry out and are unable to absorb oxygen or remove carbon dioxide or regulate electrolytes – the main reason frogs have that slimy skin.

“There are all these theories about it, but it’s probably a combination of things,” DiLeo said. “They face habitat loss, ultraviolet radiation, pollution. Maybe at the same time, one of those factors has given the fungus an edge to allow it to become an epidemic.”

The research is especially important in southern New Jersey, home to state threatened and endangered species such as the southern gray tree frog, the eastern tiger salamander, and the Pine Barrens tree frog.

Conservation groups such as the American Littoral Society are pushing Congress to expand the Cape May National Wildlife Refuge for the express purpose of protecting amphibians, spokesman Matt Blake said.

“The biggest threat to amphibians has to be the continued loss of forest,” he said. “You have these big, healthy forests that stand the test of time and are ecologically viable against all sorts of pressures – climate change, habitat loss, changes in land use. What’s critical is to maintain these large blocks of unbroken habitat. That’s something we’re losing.”

He pointed to a study last year by Rowan and Rutgers universities that found that New Jersey lost more than 16,000 acres of open space to development each year between 2002 and 2007.

“For the first time we had more land cover in asphalt and pavement and urban uses in New Jersey than in forest,” he said. “We crossed a critical threshold.”

His nonprofit group is targeting one large tract of forest in Cape May County that is contiguous to other protected land, he said. The sensitive nature of negotiations prevented him from identifying the private property, but Blake said it contains vernal pools that are essential for frogs.

“Unfortunately some of our best habitat is becoming islands surrounded by sprawl,” he said. “Cape May County is our Amazon. That’s our biodiversity hotspot.”

Golden’s research will contribute to the international effort to understand the global decline of amphibians.

Golden will continue his nightly patrols through the end of the month. He said he enjoys working with frogs.

“They’re benign,” he said. “I don’t know too many people who don’t like frogs.”