Children Get Hands-on Lesson in Conservation at WNW Festival 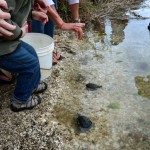 MIDDLE TOWNSHIP — When it comes to diamondback terrapins, 8-year-old Kelly Wood is getting to be an expert.

For the past four years, she has been among the children who have helped release turtles into their natural habitat at the Wetlands Institute just outside Stone Harbor on Stone Harbor Boulevard during the annual Wings ’N Water Festival. This year, her 2-year-old brother, Connor, also released a turtle.

At the festival, children are taught how to properly handle a turtle that has never lived outside an aquarium. The youngest handlers, such as Connor, team up with a volunteer to ensure the terrapins reach the water safely.

“I think it’s important for them to leave to appreciate nature,” said the children’s father, Brian Wood, of Caldwell, Essex County.

That’s precisely the purpose of the Wings ‘N Water Festival, which celebrated its 29th year and ran from Saturday to Sunday.

The Wetlands Institute is a nonprofit organization that promotes appreciation and understanding of the wetlands coastal areas through research, education, and conservation. 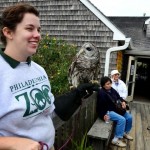 “Every year, this event provides entertainment and opportunities for the entire family to enjoy what our community and habitat has to offer — art, music, food, kayaking, birding, and more,” Wetlands Institute Executive Director Cindy O’Connor said in a written statement. “Not only are we the caretakers of this exquisite habitat, but we are, more importantly, the caretakers of our future.”

The festival, which is based at the institute and various locations in Avalon and Stone Harbor, featured various exhibitions, including a golden retriever demonstration in the water, fish netting demonstrations and a “Birds of Prey” demonstration. There were arts and crafts for children, as well as folk music, craft vendors and bay cruises — although Sunday afternoon’s windy weather caused a few cruises to be cancelled.

Patrick Baker, a visiting scientist at the Wetlands Institute, led Sunday’s diamondback terrapin release. He said the festival gives the institute a chance to expose the public to the work they do throughout the year.

The institute takes part in a terrapin conservation project, which picks up road-killed terrapins throughout the surrounding area and salvages their eggs. 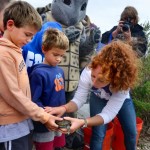 The eggs are incubated and the baby turtles are then raised for a year at Stockton University in Galloway Township, Atlantic County, where they are fed and do not hibernate, resulting in a 1-year-old turtle more akin to the size of a turtle of three or four years. That gives the turtles a better chance of surviving in the wild, Baker said.

“It helps to offset the mortality rate,” Baker said. “They do survive in nature, and they do come back to lay their eggs in about seven years.”