25 Years of Terrapin Conservation and Research 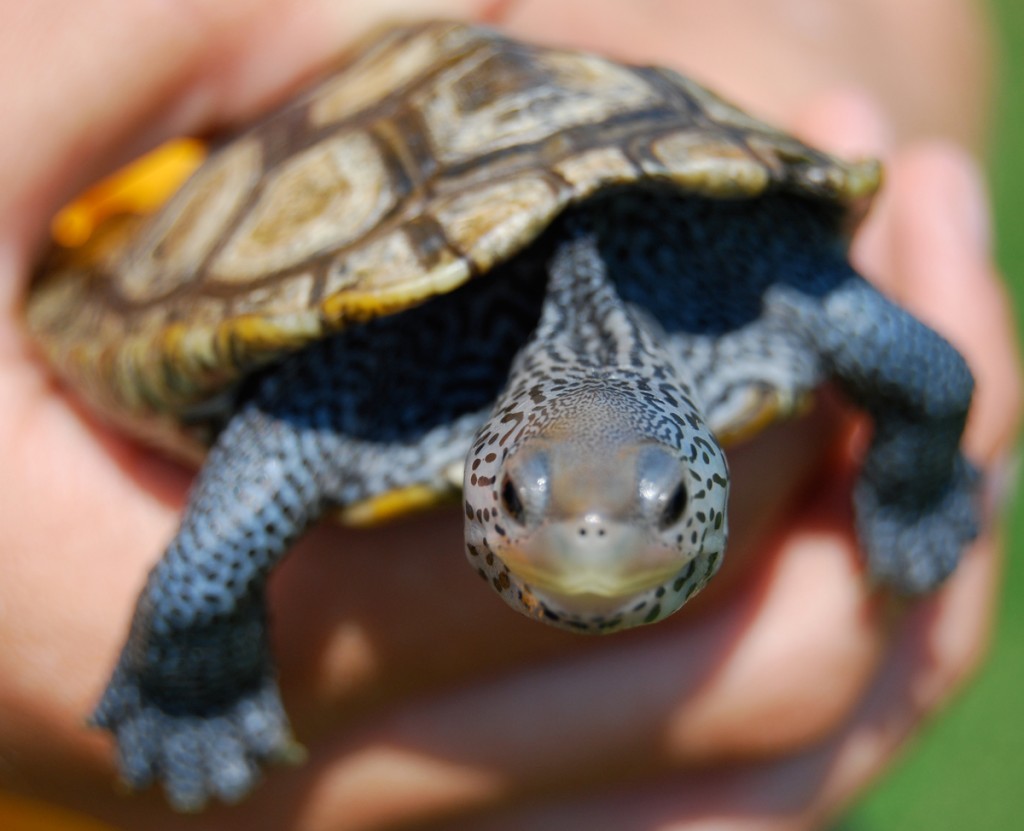 For this reason, terrapins are the only species of turtle that live their entire life in coastal salt marshes, one of the most productive ecosystems on Earth, where food and other resources are abundant.

The diet of M. terrapin consists largely of invertebrates, such as fiddler crabs, blue claw crabs and blue mussels. Terrapins are an important predator of the salt marsh snails that feeds on salt marsh cord grass (Spartina alterniflora). When terrapins, and other predators, are removed, snails overgraze the cord grass leaving a barren mudflat (Silliman and Bertness 2002). For this reason, healthy terrapin populations are essential for maintaining salt marsh ecosystems.

Archaeological evidence suggests that Malaclemys terrapin was utilized for food in New Jersey prior to European settlement (S. Bierbrauer, personal communication); however, as human populations increased throughout the terrapin’s range, the harvest reached unsustainable levels by the late 1800’s and early 1900’s. Captive propagation, for commercial purposes, was initiated by the United States government in the early 20th century because the range-wide population was believed to be in danger of extinction. With the advent of Prohibition and then the Great Depression, the demand for terrapin meat eventually decreased and the depleted populations began to slowly recover. Although most states now have legislation that regulates the collection of M. terrapin (Watters 2004), this species is still taken from the wild in parts of its range. In 2006, the last year in which terrapins were legally harvested in Maryland, watermen reported a catch of 10,500 terrapins.

Habitat destruction poses a serious and ongoing threat to terrapin populations. The diamondback terrapin’s range is coincident with dense areas of human population in the United States. Coastal development, particularly salt marsh draining, increased use of coastal waterways for commercial and recreational purposes, and loss of sand dunes on barrier beach islands, an important habitat for nesting, contribute to habitat loss and degradation. 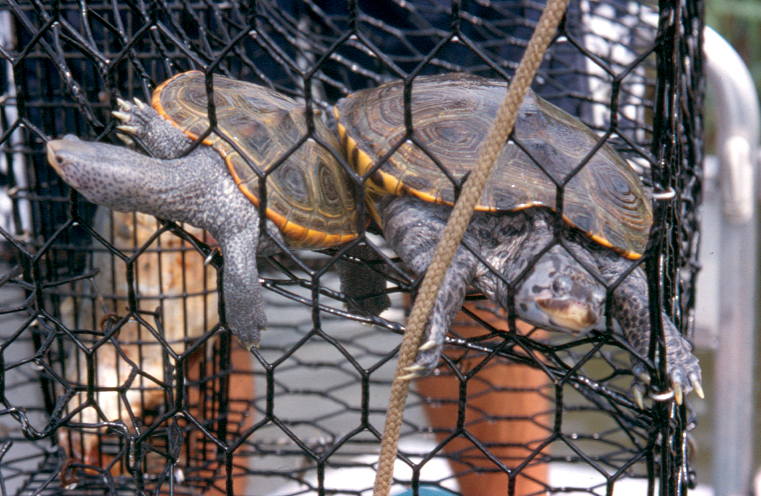 Terrapins caught in a ghost trap

In states with a commercial blue crab (Callinectes sapidus) fishery, incidental drowning in crab traps is a major threat to M. terrapin. Terrapins, attracted to the bait, enter through an underwater opening, become trapped, and drown within a few hours (Wood 1997). Adult males, which are smaller than adult females, and juvenile females are caught more frequently than adult females due to the limitations on the size of the trap entrance. Ghost traps, which are crab traps that have been lost or abandoned and are no longer being checked, are a significant source of terrapin mortality. It is estimated that 2 million commercial crab traps are deployed annually throughout the range of M. terrapin, with approximately 25 percent of those traps becoming lost or abandoned (Guillory and Prejean 1998). Terrapins and other animals that enter ghost traps become trapped and die. The decomposing bodies become the “bait” for terrapins, blue claw crabs and other marine organisms that scavenge for food, creating a cycle that is only broken by removing the trap.

During the annual nesting season, adult female terrapins are frequently struck and killed by motor vehicles while attempting to cross roadways in search of nesting sites (Wood and Herlands 1997). The Wetlands Institute personnel have documented over 10,000 terrapin roadkills between 1989 and 2011). Hatchling terrapins migrating to water after emerging from the nest may also be run over on the road, but their carcasses are less conspicuous. Hatchling terrapins are frequently found trapped in storm drains during the periods of emergence from the nest in fall and spring. If these hatchlings are unable to escape, they may die from lack of food or exposure to chemicals that concentrate in storm water systems.

Conservation Programs at The Wetlands Institute

Concerns about the local terrapin population led Dr. Roger Wood, former Director of Research at The Wetlands Institute, to establish the Terrapin Conservation Project in 1989. The project has grown and broadened in scope to become the Coastal Conservation Research Program (CCRP), where undergraduate interns work closely with research scientists at The Wetlands Institute on a wide variety of research and conservation projects, including terrapin conservation. Since 1989, over 200 college and university students from more than 100 academic institutions have participated in the program. 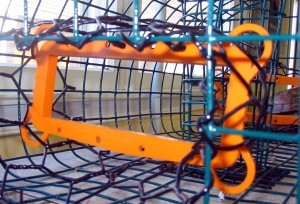 The Wetlands Institute has been the leader in the development and testing of Bycatch Reduction Devices (BRDs) to keep terrapins and other non-target marine organisms from entering crab traps. In 1992, Dr. Roger Wood fashioned the first BRD prototype from a wire coat hanger. The rectangular device fits into the inner (narrow) end of entrance funnels in a typical commercial (Maryland-style) crab trap and prevents the entry of adult female terrapins. An important concern in the design process was to ensure that the BRD does not reduce the number or size of crabs caught. Results from the program’s long-term studies suggest that not only do BRDs greatly reduce the number of terrapins caught by modified traps, they have also actually increased the marketable crab catch over unmodified traps of standard design (Wood 1997). In addition to reducing terrapin mortality, BRDs may prevent or reduce the number and diversity of other vertebrate animals that might be incidentally trapped in crab traps (Guillory and Prejean 1998). Although BRDs have been shown to be effective when tested in other states within the terrapin’s range, only four states (New York, New Jersey, Delaware, and Maryland) have adopted regulations mandating the use of BRDs. The Wetlands Institute works with scientists and state agencies throughout the diamondback terrapin’s range to advocate for the use of BRDs to reduce bycatch and loss of biodiversity in salt marsh ecosystems. Since 2012, The Wetlands Institute research scientists and staff have worked with high school students from The Marine Academy of Technology and Environmental Science to distribute BRDs and informational materials about biodiversity conservation to recreational crabbers.

Over the years, student researchers in the CCRP have conducted projects that examine the impacts of ghost traps on biodiversity in the salt marsh surrounding the Wetlands Institute. In 2007, an intern located and removed 41 ghost traps. A minimum estimate based on skeletal remains in the traps suggested that they contained at least 41 dead terrapins and the remains of other marine organisms, including 37 blue crabs. Although they are required in New Jersey, only four of the 41 ghost traps were equipped with BRDs. This source of terrapin mortality could be greatly reduced if regulations to prevent bycatch were strengthened and enforced. Terrapins and other marine organisms in New Jersey’s coastal waters would benefit from a trap removal program similar to the state-wide efforts organized in Virginia, North Carolina, Florida, Alabama, Mississippi, and Texas. The Wetlands Institute is working with state agencies to improve our ability to detect and remove abandoned fishing gear. 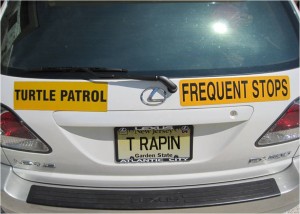 During the nesting season, research scientists and student interns at the Wetlands Institute patrol a 38-mile transect of local roads searching for terrapins in need of assistance. In some cases, the terrapins are simply helped across the road, always in the direction they are traveling. Institute staff help hundreds of terrapins safely cross roads each year. Injured terrapins are given medical attention and, whenever necessary, sent to a local veterinarian (Dr. Mark Logan, VMD) who volunteers his services to the project. Life does not end when a terrapin is killed on the road. Depending on the amount of damage sustained, dead terrapins may be taken back to the laboratory so that undamaged eggs can be retrieved from the carcass, washed, and then artificially incubated. Because terrapins exhibit temperature-dependent sex determination (TSD), recovered eggs are held at 30°C (86°F) throughout development to produce hatchlings that are all female. The resulting hatchlings are put into a year-long “head start” program (described below) to improve their chances of survival and released back into the wild. In this way, we attempt to offset the high mortality of adult female terrapins on the road, by increasing the number of females in the next generation. Each year, we find between 400-600 adult female terrapins killed on the road patrol transect and collect several hundred eggs for incubation and headstarting.

Terrapins hatched from the eggs of roadkilled females are reared at a special facility at Stockton University for ten months. Kept warm and well-fed through the winter, the resulting “headstarter” terrapins reach the size of a wild 3 or 4-year old terrapin in less than one year. Prior to their release into the salt marsh, headstarter terrapins are measured, weighed, and marked with a uniquely numbered microchip, similar to those injected in cats and dogs. These microchips allow for evaluation of the head-starting program. To date, several of these headstarters have been observed to return to nest on the nature trail at the Wetlands Institute. In 2011, 192 terrapins that were hatched from eggs recovered from roadkills were released at three locations along the road patrol transect. Ongoing research projects aim to determine the distribution, movements, and abundance of headstarted terrapins in the local population. 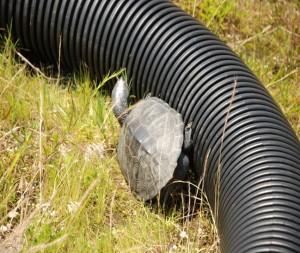 Conservation programs are not effective on their own in stabilizing populations unless the underlying reasons for decline are addressed; therefore, researchers at The Wetlands Institute seek to reduce roadkills and other factors that contribute to the high mortality rate for the local population. In 2004, an intern-driven project led to the installation of barrier fencing along one stretch of our standard road patrol. In an effort to reduce roadkills in areas of the road patrol transect known to be major “hot spots”; the fencing project has expanded over the years to include sections of the causeways that connect Seven-mile Island to the main land. Fencing material has been improved over the years with the goal of reducing costs of materials and labor while improving the barrier function. Currently, more than 11 miles of barrier fence has been installed along roads that cross the salt marsh. Dan McLaughlin, Coordinator of Research and Conservation at The Wetlands Institute, works with community groups that wish to install barrier fences in their local area.