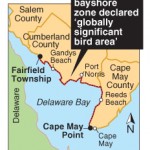 Fifty miles of the Delaware Bay coast from Cape May Point to Fairfield Township in Cumberland County have been declared a globally significant “Important Bird Area.”  The designation, part of an international program to identify important avian areas, was brought to the United States in 1995. There are 448 other Important Bird Areas in the U.S.  Some are wondering what took so long for the Delaware Bay shore to be recognized.

“I think we’ve taken for granted the importance of the Delaware Bay because we’re so close to it,” said David Mizrahi, who works at the Cape May Bird Observatory for the New Jersey Audubon Society, which oversees applications for Important Bird Areas in the Garden State.

More than 100 Important Bird Area applications have been pushed through in New Jersey. Mizrahi was surprised when talk of the bayshore application began.

The 50,000 acres within the new Important Bird Area host more than 400 species of birds, but it is not just diversity that wins a designation. It also doesn’t come just from hosting rare birds. Two of the four species that helped win the designation, American black ducks and snow geese, are quite common but helped win the designation because they are found in such huge concentrations during the winter along the bayshore.

Mizrahi said “I was left scratching my head” when the two species helped win the designation. He said BirdLife International, a conservation group that created the Important Bird Area program, and the National Audubon Society, the group that brought it to America, made the decision on which species “are the notable ones.” Mizrahi said the other two species — red knots and ruddy turnstones, two shorebirds in decline — were obvious picks.

Two other shorebirds, semipalmated sandpipers and sanderlings, could have been picked, as they are in decline, he said. He also mentioned red-throated loons, black-throated loons, surf scoters, black scoters, and the fall hawk migration that is one of the great birding spectacles in the region.

“Why black ducks and snow geese? It’s because they’re occurring in such a large number that it triggers the criteria,” Cecil said.

An Important Bird Area can exist within a state, a continent, or globally. Cecil said there are 449 in America and “maybe 500” more will be designated. There are two other Important Bird Areas locally: the Edwin B. Forsythe National Wildlife Refuge and the Bass River Marsh.

The designation has no regulatory impact.

“There is no legal or otherwise protective measure that comes with the designation,” Cecil said.

The designation, however, does help funnel grants and other money to protect an area. The Important Bird Areas program can be used to protect habitat, improve management practices on the land, and raise public awareness.

Much of the land is already preserved within 13 New Jersey Wildlife Management Areas on the bayshore, including Higbee Beach, Dennis Creek, Egg Island, Fortescue and Heislerville. The area also includes sections of the Cape May National Wildlife Refuge and tracts owned by the New Jersey Division of Parks and Forestry.

David Chanda, who directs the DEP’s Division of Fish and Wildlife, said the state has long recognized the global importance of the bayshore to birds.

“That is one key reason this area has long been targeted as the site of many of our wildlife management areas,” Chanda said.

The designation may help red knots, a bird that is currently a candidate for the federal endangered species list, and ruddy turnstones. Early aerial surveys found 95,000 red knots and 80,000 turnstones. The most recent survey found fewer than 16,000 red knots and fewer than 37,000 ruddy turnstones. The decline has been studied by biologist Larry Niles of the Conserve Wildlife Foundation, who said the designation will boost the bay’s profile nationally and internationally.