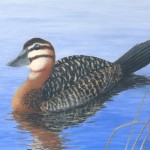 Ryan Van Dongen, 14, of Egg Harbor Township, was about 3 years old when his mother realized he had artistic talent.

But that doesn’t mean Ryan does not practice. He said he doodles and draws all the time, often carrying a sketchpad wherever he goes.

He recently won Best in Show in the 2011 New Jersey Federal Junior Duck Stamp Competition. The state contest, hosted by the Wetlands Institute, drew 160 entrants from kindergarten to 12th grade from all over the state, contest co-coordinator Kaitlin Gannon said.

Ryan won with a painting of a masked duck, a tropical species that occasionally appears in the southern United States. He will next compete against winners from other states at the John Heinz National Wildlife Refuge in Tinicum, Pa., on April 15. The national winner’s art will be used on the U.S. Postal Service’s 2011 Junior Duck Stamp.

Ryan also recently won the national “Robert Bateman Get to Know Your Wild Neighbors” art contest, he said, with a painting of a barred owl. Ryan said he is a straight-A student at Egg Harbor Township High School and loves science.