In a race against the clock, the Wetlands Institute, American Littoral Society and Middle Township, along with a committed group of conservation partners, will restore prime horseshoe crab and shorebird habitat destroyed by Superstorm Sandy on the Delaware Bayshore in time for this spring’s horseshoe crab spawning and shorebird migration season. 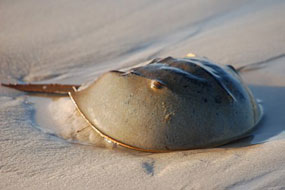 In a rapid assessment of the impacts of Hurricane Sandy immediately following the storm, researchers Larry Niles, Amanda Dey (NJDEP), David Mizrahi (NJ Audubon) and Lenore Tedesco (Wetlands Institute) identified the Delaware Bay beaches, critical habitat for the world’s largest concentration of horseshoe crabs and a key stopover point for migratory shorebirds, as significantly impacted by Superstorm Sandy, and a priority for habitat restoration.  The storm stripped the beaches of their sand.

Without sand at the high tide line on the beach, horseshoe crabs will be unable to bury their eggs, further endangering this Bayshore icon whose numbers are already low.   This would also be harmful to migrating shorebirds, especially the red knot, an endangered species in New Jersey. When the birds arrive on the Delaware Bayshore, they depend on the fat-rich horseshoe crab eggs to replenish their strength for the last leg of their 10,000-mile journey from the tip of South America to their nesting grounds in the Arctic. Based on monitoring led by NJDEP and Dr. Larry Niles, these beaches were used by more than 50% of shorebirds on the Bayshore during the 2012 stopover. 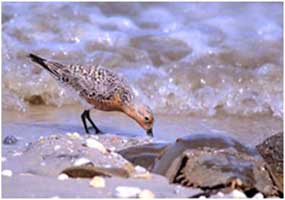 “This project is critical to the continuing efforts to protect and restore the horseshoe crabs and shorebirds of Delaware Bay especially in light of the added blow that Superstorm Sandy dealt the area.  The prospect of losing a spawning season for the horseshoe crabs and the potential for a huge impact on already endangered shorebirds made action imperative.  It’s been amazing to see the multitude of people and organizations that have come together to get sand on the beaches ahead of the crab’s arrival. In the weeks following the storm, most assessments were that it would be impossible to make this project a reality in time” said Lenore Tedesco, Executive Director of The Wetlands Institute.

The project will be carried out by a partnership which includes the American Littoral Society, the Wetlands Institute, LJ Niles Associates, Dianne Daly CEP, New Jersey Department of Environmental Protection, the Stockton University Coastal Research Center, and Middle Township. More than a dozen partners, both public and private, are working to accomplish this project.  Critical support has been provided by the USFWS Cape May National Wildlife Refuge, The Nature Conservancy and several Bayshore landowners.

The project partners will restore nearly one mile of beach in segments that include southern Reeds Beach, Cooks Beach, Kimble Beach, and possibly northern Pierces Point. Restoration will involve trucking in nearly 24,000 cubic yards of sand and removing rubble from several beach areas. “This is a unique project because the project design and specifications are based on creating suitable habitat for horseshoe crabs.  It’s not a beach renourishment project or dune construction project” said Tedesco, who has been evaluating sand characteristics and beach profiles that have been designed by scientists at Stockton University’s Coastal Research Center.

“This project is unique because it’s a great example of how a project targeted to benefiting the environment can also benefit local residents and the regional economy” said Mayor Dan Lockwood of Middle Township. In addition to the revenue for local businesses receiving contracts for the project, nature tourism to view the wildlife of Delaware Bay is a multimillion dollar annual contributor to the region’s economy.  Concurrent to this project, the Township’s Deputy Mayor Tim Donohue and Open Space and Recreation Project Team have been part of a cooperative effort with environmental groups to improve the Township’s Delaware Bay recreation areas to attract more of the nature tourism market.  Committee member Susan Delanzo added, “It is wonderful to see this project come through so quickly. It is for the common good and as a result of a lot of hard work and coordinated efforts of so many organizations and agencies. I think that our bay community is one of our most beautiful natural resources and we should do everything within our power to preserve it.”

The project has had strong support from the NJ Department of Environmental Protection and the Army Corps of Engineers who have been reviewing the permits required for the work. Middle Township has been providing direct assistance in carrying out the field work, and local landowners have granted permission for the conservation work to be done on their properties.

The project is funded by grants from the National Fish and Wildlife Foundation, NJ Corporate Wetlands Restoration Partnership, and in-kind contributions from the project partners.