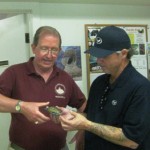 The acclaimed marine life artist is becoming notorious for leaving the Jersey shore community with much more than expected. Wyland, in town for his Memorial Day art exhibition at Ocean Galleries, kicked off his weekend in Stone Harbor with a tour of the Wetlands Institute, where he fell in love with a juvenile terrapin. 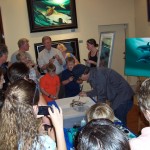 A planned Wetlands fundraiser at Ocean Galleries the following night inspired Wyland to paint his new turtle pal as crowds watched in amazement. The enthusiastic conservationist then auctioned off the painting to raise funding for the organization with a similar mission as his own, keeping the planet and our coastal ecosystem “blue”.  When a bidding war ensued, the generous artist agreed to paint a second terrapin image for another happy fan and art collector. 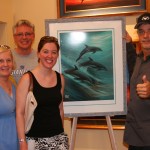 Including the initial painting donation of Faster Higher Strong, Wyland and Ocean Galleries raised over $7,600 for the Wetlands. Last summer, Wyland participated in a similar fundraiser for the Marine Mammal Stranding Center in Brigantine, NJ, where he generously donated five paintings in support of the important coastal rescue center, four more than initially promised.