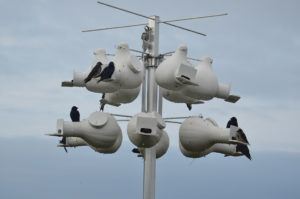 Its spring! Hasn’t quite felt like spring in the marsh through most of April and early May. The marsh got nice and green, but the temperatures stayed cold and the rain just kept on coming. My fingers are crossed that the weather turns glorious.

As I write this column in early May, one thing is certain – the sounds of the marsh are glorious. It’s a regular symphony of sounds and it’s always a fun time of year. Birding by ear is an important skill and especially for the oldest and slowest member of the Marshketeers, something I need to work on every year. So much of the bird life out there is never really seen, but only heard. Of course, each year, I find I have to relearn so many of the calls.

The chirping of the Ospreys followed closely by the chorus of the Willet is a true harbinger of the season on the marsh. Both of these birds are easy to see, and thankfully abundant in our marshes. This year, the new martin house has expanded the colony noticeably so that their chatter is a new and ever present sound on the back deck. They’re such social birds and their vocalizations really do seem to be friendly conversation.

Then there are my favorites. The secret marsh birds – those that we only rarely see – but the well-tuned ear can often hear. The Clapper Rail is one such bird. The term thin-as-a-rail actually comes from these birds. They make their living in the marsh moving amongst the Spartina blades and their bodies are relatively thin so that the grasses barely move. Their call is a loud, rattling noise that is a common sound in our marshes. Nesting pairs enhance their pair bonding by merging their calls until they sound like one bird. A group of clapper rails are collectively known as an “applause”, “audience”, or “commercial” of rails attesting to the dominance of their vocalizations. You won’t see them very often – but a visit to the Institute or some quiet time in the back bays will get you an earful.

I hope you will find the time to hear the symphony of the birds of the marsh. Taking the time to be still and listen brings such richness. Stop by and visit, take a walk on the elevated walkway and be serenaded by all the sounds of the marsh. We’re here every day and the welcome mat is out.