Ospreys in New Jersey Increase with Help of Volunteers 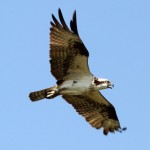 Fred Akers pulled out binoculars as he drove his motorboat around a bend in English Creek and focused on a nest atop a wooden platform. He sighed.

Three osprey chicks sat amid a tangle of twigs and branches, unaware that Akers would soon attach a metal band to their legs as part of an effort to monitor the osprey population in New Jersey.

As Akers pulled his boat up to the marsh, an adult osprey sounded a warning cry and took off, flying circles around the nest. The chicks instinctively ducked.

A similar scene has played out dozens of times during the past few weeks as a small group of volunteer osprey banders visited nests throughout South Jersey. Summer marks the peak of nesting season, and the young ospreys – with their wide, yellow eyes and sharp, pointed beaks – have reached the size where they are big enough to be banded but still small enough to not fight back when hands reach into the nest and gently take a foot.

Last week, Akers banded 17 ospreys in one day. Other volunteer banders have had similar success this season. As the osprey population has rebounded to nearly its anecdotal historic count from the 1940s, the volunteers have more nests to check.

Kathy Clark, supervising zoologist for the New Jersey Division of Fish and Wildlife, said there are about nine volunteers listed on her federal wildlife banding permit, but several have since stopped helping because the work, which involves trudging through marshes and climbing up ladders, became too physically taxing for them as they aged. But new volunteers, such as Akers, have joined in to help.

“The population has gotten so big now that it takes a bigger team to track the breeding population and the success or failure of it,” Akers said.

The volunteers spend many hours on the river during nesting season, coordinating their trips with the tides and even spending significant amounts of money for boat fuel and repairs. But they continue the work for many reasons, including a deep fascination and love of the “fish hawk” and a strong connection to their environment.

Ospreys are top-level predators that feed mostly on fish, and a healthy population of top predators means the overall ecosystem is healthy to support the food chain, said Hans Toft, another volunteer monitor.

“The important thing about the work that goes on … is it keeps our finger on the pulse of the population. If there’s a problem, we’re going to see it there first and not in the total population census,” Clark said. “It’s a great long-term monitoring tool, and by having trained volunteers who come back every year, it’s really like having a much larger staff.”

Accounts from the 1940s describe an osprey population so large that it seemed the birds nested on every telephone pole, Clark said. The general count was estimated to be about 500 nesting pairs living in the state.

But when the pesticide DDT was introduced in the 1950s, the chemical caused an unexpected reaction among raptors, which ingested the chemical through the fish they ate. The eggs the birds laid suddenly had very thin and fragile shells. If the weight of the mother bird sitting on her nest did not crush the egg, moisture that evaporated from the egg too easily would cause the baby ospreys to die before hatching.

By the early 1970s, only about 50 pairs were left in the state, Clark said. Wildlife officials even brought up eggs from the Chesapeake Bay region to help begin restoring the population in New Jersey, she said. After DDT was outlawed and the chemical began working its way out of the food chain, there still was the problem of where the birds could nest, Clark said. Development on barrier islands had encroached on habitat and reduced the available spots for birds to nest. 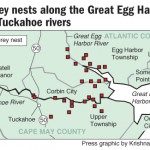 So volunteers began experimenting with installing platforms. That grew into a concerted effort to install nesting platforms and monitoring nests, both tasks now done mostly by volunteer wildlife watchers. As that work was under way, another effort to improve water quality also was paying off: Cleaner water meant more fish for the ospreys to eat, and the nests that were established had successful broods.

Clark said the population has rebounded so significantly that the state could move the census to every four years instead of every three. For the volunteers, the news that their efforts are paying off is gratifying.

“The thing that’s exciting about it is seeing the magnificent comeback that these birds have made and the fact that it’s visible, people get a reward from having made a difference,” said Jane Galetto, president of Citizens United to Protect the Maurice River and its Tributaries. “It’s a situation that people caused and we’ve also been a solution to.”

Galetto began working with ospreys in 1986 after she and her husband thought a free-standing pole near their Maurice River property would make an excellent nesting spot.

When Galetto first began banding birds, she found only three chicks on the river. This year Galetto and her crew are monitoring 44 nests and will band 60 to 70 chicks.

“With running the watershed organization, I feel like I get glued to the chair, keeping track of volunteers and the activities that we offer,” she said. “It’s easy to become disconnected with the river, but when you’re checking 50 or so platforms to see if they’re active and counting eggs and coming back to band chicks, it gets you out on the river a lot, and you’re doing something.”

A lifelong fascination with the bird is what drew Cape May County Technical High School natural sciences teacher Hans Toft into assisting the state with collecting data and installing nesting platforms. He has worked for 20 years with conservation groups and the state, even taking his students into the marsh to help.

“The first time I climbed up the ladder and looked into the nest, it took my breath away,” he said. “They laid out in their nest with their orange eyes and camouflage color and mother nature, it’s just astounding to look at that. You wonder how they can be out there in thunderstorms, hot days, how can they raise the birds out in the open like that, but they do it.”

While Galetto and Toft have worked for years to help restore the osprey population, Akers is a newcomer with about three years of banding experience. In 2007, the Great Egg Harbor River Watershed Council began a project to install osprey platforms along the river. Akers said the project was so successful that the state asked if he would assist with keeping an eye on the population.

Out in the English Creek marsh, Akers and his son Jim pulled the boat up to the bank and secured it. The pair carried two large ladders over to the platform, about 15 yards away, through squishy mud and treacherous holes that sucked in ankles and calves. As they raised the ladders, the parent ospreys circled overhead, sounding warning chirps.

The largest bird in the nest was at the age of fighting back, something that rarely occurs. For the first time in his three years of tagging, the chick lunged and gave a warning peck. Akers gently took a feather sample and carefully placed a metal band around one foot of each of the nest’s three chicks.

“This isn’t fun. It’s interesting, but it’s not fun,” Akers said of the process. “I don’t like to disturb the birds. I don’t enjoy that part of it.”