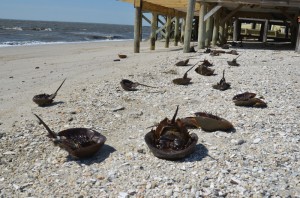 The Wetlands Institute, Conserve Wildlife Foundation of N.J., and the Manomet Center for Conservations Sciences, in cooperation with The New Jersey Department of Environmental Protection, have launched a new program to help recover horseshoe crabs populations in the state.  The program, “Re-turn the Favor,” invites volunteers to rescue horseshoe crabs that have been turned over by wave action or that have become trapped behind bulkheads or other human-built structures.  The name reflects the key role that horseshoe crabs play in protecting human health, as well as their irreplaceable role in the Delaware Bay ecosystem.

Delaware Bay is the most significant site in the world for breeding horseshoe crabs.  Their population has been drastically reduced since a harvest, as bait for eels and whelk, began in the 1990s.  The loss of horseshoe crab populations has had a direct impact on the populations of the migratory shorebirds that rely on their eggs as food to “refuel” before migrating north to the Arctic to breed.  Many of the species that rely on the Delaware Bay stopover site—declared to be of Hemispheric Importance by the Western Hemisphere Shorebird Reserve Network–have populations only 20% of what they were before the intensive crab harvest.

N.J. has a moratorium on harvest of horseshoe crabs.  Nonetheless, the current fishery regulations, governed by a complex mathematical model, allow take in other states, and predicts that the horseshoe crab population will not be recovered until at least 2073.  The new program seeks to shorten that recovery time by reducing a currently unaddressed source of horseshoe crab mortality. 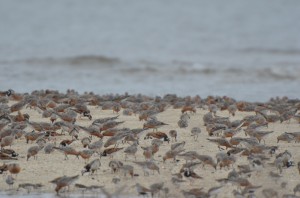 Conservation groups are being asked to adopt one of N.J.’s Delaware Bay beaches with a formal agreement and provide supervision to volunteers who will turn crabs right-side up and remove them from bulkheads, jetties, rip rap, or other human-made structures.  Numbers of crabs rescued will be tallied by sex to provide an accurate picture of the program’s effect.

“This novel program is designed to be compatible with N.J.s moratorium on horseshoe crab harvest and the need to protect migratory shorebirds under the states’ endangered and nongame species regulations,” said Dr. Amanda Dey, principal zoologist for New Jersey’s Division of Fish and Wildlife.  “It reflects a partnership among our agency and our conservation partners that will benefit the natural and economic resources of the Delaware Bay.”

“As part of our Shorebird Recovery Project in Delaware Bay, we surveyed 400 households around the Bay last year and found overwhelming support for protection of the Bay’s horseshoe crabs and shorebirds,” said Dr. Charles Duncan of the Manomet Center.   “‘Re-turn the Favor’ is an easy and fun way for residents and visitors to put their beliefs into action that makes a difference.”

“Horseshoe crabs are an iconic species for the Delaware Bay and they are in trouble.  Re-turn the Favor is a wonderful way for the community to participate in a conservation effort to affect change.  We are excited to be fielding volunteer teams and hope people will get involved” said Lenore Tedesco, Executive Director of The Wetlands Institute.

In addition to the organizers, conservation groups that have already agreed to participate include The Nature Conservancy of New Jersey, New Jersey Audubon Society and Citizens United to Protect the Maurice River and its Tributaries.

Organizations who wish to adopt a beach to rescue crabs are encouraged to contact program leaders at crabwarden@gmail.com; individuals who wish to participate should contact conservation@wetlandsinstitute.org).

For more than 40 years, the Manomet Center for Conservation Sciences has used science and partnerships to build a more sustainable world. The Center is a non-profit research organization headquartered in Massachusetts.  Its Shorebird Recovery Project works in 13 nations across the Americas to restore and maintain the populations of shorebirds including the iconic Red Knot.