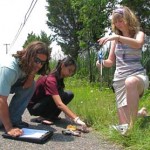 For well over a century, diamondback terrapins, the only species adapted to life in the brackish waters of coastal salt marshes, have been adversely affected by a variety of human activities.  A century ago, overhunting of the northern diamondback terrapin, Malaclemys terrapin terrapin — considered a gourmet delicacy — nearly extirpated populations in many parts of its range.  Eventually, the combined effects of Prohibition (sherry was considered an essential ingredient of terrapin stew recipes) and the economic stresses of the Great Depression in the 1930s brought an end to significant commercial exploitation of terrapins.  It was not until nearly the late 1960s that terrapin populations recovered to a level approaching their former “pre-gourmet” abundance.  More recently, however, two other threats to terrapin populations have arisen.

Coastal development has led to considerable habitat destruction, especially of traditional nesting sites on barrier beach islands.  Along the Atlantic coast of New Jersey, the search for alternative nesting sites on highway embankments has resulted in large numbers of roadkills every nesting season.  And the loss of terrapins to the commercial crabbing industry, through drowning in crab traps, has increased dramatically. 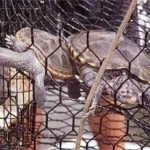 Mortality from drowning in commercial crab traps threatens the population.

The serious declines in southern New Jersey’s terrapin population, due to increased mortality from roadkills and drowning in crab traps, prompted the launching of the Terrapin Recovery/Conservation Project in 1989.  Under the direction of Dr. Roger Wood, the program developed techniques to incubate and hatch eggs recovered from road-killed terrapins, after which the hatchlings are head started and released.  In addition, the program’s ongoing studies have proven the effectiveness of Bycatch Reduction Devices to prevent drowning in crab traps. Today, the program continues to develop new approaches to address conservation needs of terrapins.