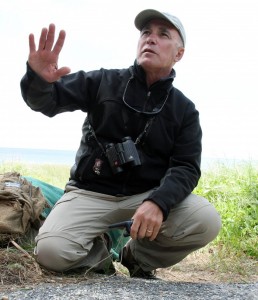 LOWER TOWNSHIP – A multinational force of researchers hides in the dune grass overlooking the Delaware Bay, waiting for the sound of cannon fire.

A scouting party is coercing the target, a flock of shorebirds, to move up the beach and into range. Everybody has been told to keep quiet.

With a loud bang and the smell of gunpowder, a net 10 meters wide and 23 meters long is propelled into the air. When it comes down, it envelops about 250 of the 750 birds in the flock. The rest fly off, none the worse for wear.

Niles already has instructed his force of volunteers from Colombia, Australia, New Zealand, the United Kingdom, Kenya, Chile, Canada, Argentina, Paraguay, Amsterdam, America and a native Indian from Moose Factory Island in northern Ontario. They are a crew concerned about a decline in shorebirds that visit the Delaware Bay each spring to feed on horseshoe crab eggs before continuing a migration that brings them from wintering grounds in South America to nesting grounds in the Arctic.

In the chaos that comes with 250 birds in a net, all of which must be carefully removed and studied before being released, Niles yells some last-minute instructions.

“Don’t walk behind the net. Stay on the seaside of the net. We want 15 birds to a box.”

The netting, done here off Maryland Avenue in the Villas section of the township, is part of a larger study on why shorebirds, particularly the state-endangered red knot, are in decline. In the 1970s and 1980s, an estimated 100,000 red knots would come here each spring to feed. Last year, only 15,000 were counted.

Niles has gone to the Arctic nesting grounds in the spring and to South America in the winter to try to find answers. This year at wintering grounds in Chile, aerial surveys found a decline from 16,000 red knots to less than 10,000, Niles said. Ground surveys found a similar decline of about 6,000 birds. The birds also winter in northern Brazil and the southeastern United States, with a few along the Gulf coast, but Niles estimates there are only about 27,000 red knots left on this migratory corridor.

One theory is that there are not enough eggs on the beach, although Niles said birds got enough to eat here in 2010 and had a pretty good nesting year in the Arctic. New Jersey banned horseshoe crab harvesting in 2008 to try to help red knots.

“If there is a problem somewhere else, it had a significant impact. A lot of things can happen from Tierra del Fuego to the Arctic,” Niles said.

Charles Duncan, who leads the Shorebird Recovery Project at the nonprofit Manomet Center for Conservation Sciences in Massachusetts, where Niles works, said another theory is birds were lost in hurricanes last year as they migrated south. One bird tracked via a computer chip flew four days and four nights just to avoid a hurricane and ended up in the Antilles, he said.

“They left here in good shape last year. It was one of the better years. We all thought things were on the mend, so (Chile) was just a kick in the stomach,” Duncan said.

The flock is three to four blocks south of where the cannon-fired net is set up as the afternoon starts, but volunteers are shooing them up the beach.

Clive Minton, who invented the system of using black powder to propel the net, is on hand. Some of the volunteers have red knots and other shorebirds where they come from and are here to learn more about them.

“This is totally new. We’ve been looking at geese and ducks,” said Lillian Trapper, an Indian from the Moose Creek First Nation.

James Bay has been found recently to be an important stopover area for southbound shorebirds. Trapper said they are working on land use plans to create protected areas.

Only one red knot is found in the net. Most of the birds are sanderlings, but there are also a few ruddy turnstones and semipalmated sandpipers.

Amanda Dey, a zoologist with the state Department of Environmental Protection, said many of the shorebird species are also in decline but are not being studied like the red knot.

Dey is working on a joint survey of horseshoe crab egg masses with the state of Delaware to determine the status of the key food supply on the shores of both states.

“There’s a pretty big decline in most shorebird species, and we’re a bit stunned. We’re trying to get everybody on the East Coast to survey at once,” Dey said.

Duncan said the main thing being studied here is the weight, since the birds’ next journey is a nonstop flight to the Arctic.

“They need the reserves to get there, lay eggs and breed successfully,” Duncan said.

There is some new information emerging. The birds are too small for some types of transmitters, but Duncan said a big advance is small light-sensitive computer chips that record the level of sunlight every six minutes. If a chip is recovered, the information can track a bird’s movements via the sunlight at different latitudes. Duncan said that was used to discover the importance of James Bay and to track the storm-avoiding red knot to the Antilles.

Besides being harvested by commercial fishermen for use as bait – which is illegal in New Jersey but not other states – horseshoe crabs also are used by the biomedical industry. Their blood helps detect contaminants in medical devices and drugs.

It was believed that only about 10 percent of the crabs that are bled and returned to the ocean die, but Duncan said new studies are showing as much as 30 percent die. He suggests having the medical industry crabs be used as bait and cutting down the commercial fishing harvest.