Stockton, the Wetlands Institute Will Collaborate on Educational Programs and Share Facilities

Undergraduate and Graduate Programs, Professional Training, Student Teaching and Internships to be Developed

Galloway Township, NJ – The Wetlands Institute of Stone Harbor, NJ and Stockton University today agreed to collaborate on a wide variety of educational and research programs using the facilities of both institutions, in a memorandum of agreement (MOA) signed at a meeting of the Stockton Board of Trustees.

The two institutions will work together to expand undergraduate and graduate degree programs and professional training courses, seminars, student teaching opportunities and internships.

“This collaboration is designed to meet the increasing regional, state and national needs for Science, Technology, Engineering and Mathematics (STEM) education and to strengthen the regional economy,” said Stockton President Herman Saatkamp. “STEM is critical to the United States’ efforts to preserve Earth’s environment and to compete in a global economy.

“Stockton and The Wetlands Institute will work together to expand the economic base of southern New Jersey through educating more future scientists, researchers and educators,” President Saatkamp said. Industry projections indicate there will be 269,000 jobs in New Jersey alone for science majors by 2019. 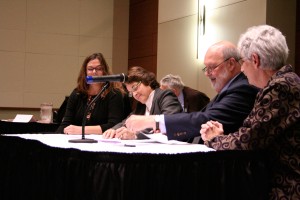 The Wetlands Institute, located on 6,000 acres in Cape May County, includes a center and an aquarium, an elevated marsh walkway, two research boats and docks, and a dormitory to house eight students or visiting scientists.

The institute will provide sites where Stockton classes can meet and Stockton will open its facilities to Wetlands Institute programs, such as at the Carnegie Center in Atlantic City, the Nacote Creek Field Marine Science and Environmental Field Station in Port Republic, NJ and other locations.

Marine Science and Environmental Science are two of the flagship programs in the School of Natural Sciences and Mathematics (NAMS, which awards more than 22 percent of the bachelor’s degrees in science and math among New Jersey’s public colleges and universities. On campus, NAMS facilities include in the 66,350-square-foot Unified Science Center, which opened in September 2013. A 59,843-square-foot expansion, to be called Unified Science Center 2, will open in 2017.

“The Wetlands Institute has a long history of research, conservation, and education in coastal and wetland ecosystems and we are pleased to enter into this agreement with Stockton College to provide additional opportunities for collaboration among our staff and faculty, staff and students at the college,” said Dr. Lenore Tedesco, executive director of The Wetlands Institute. “This is a win for the State of New Jersey.”

The Wetlands Institute has more than 1,500 members, over 200 volunteers and receives over 20,000 visitors annually, including 6,000 school-aged children. Its Education Department focuses on hands-on experiences, including community events that reach 1,500 people annually, 350 children attending summer nature programs, and more than 1,800 students in boat-based marine education programs.

The Wetlands Institute has long been known for its research and conservation efforts with the diamondback terrapin, through its Education, Research and Conservation Departments. Stockton will continue to support such conservation, including incubating recovered eggs and rearing hatchlings, as well as caring for injured terrapins.

The Wetlands Institute is also expanding its work to include avian ecology, specifically coastal birds, along with fisheries science and conservation and wetlands ecology.

The two institutions will also explore jointly seeking grants from federal and state agencies as well as private foundations.

In other business, the board of trustees approved an all-inclusive tuition/fee rate of $650 per credit for online master’s degree programs and online graduate educational endorsements and graduate certificate programs, beginning in Spring 2015. Online programs reduce the overhead costs of physical facilities, so Stockton is reducing the cost to students in those fully online programs. 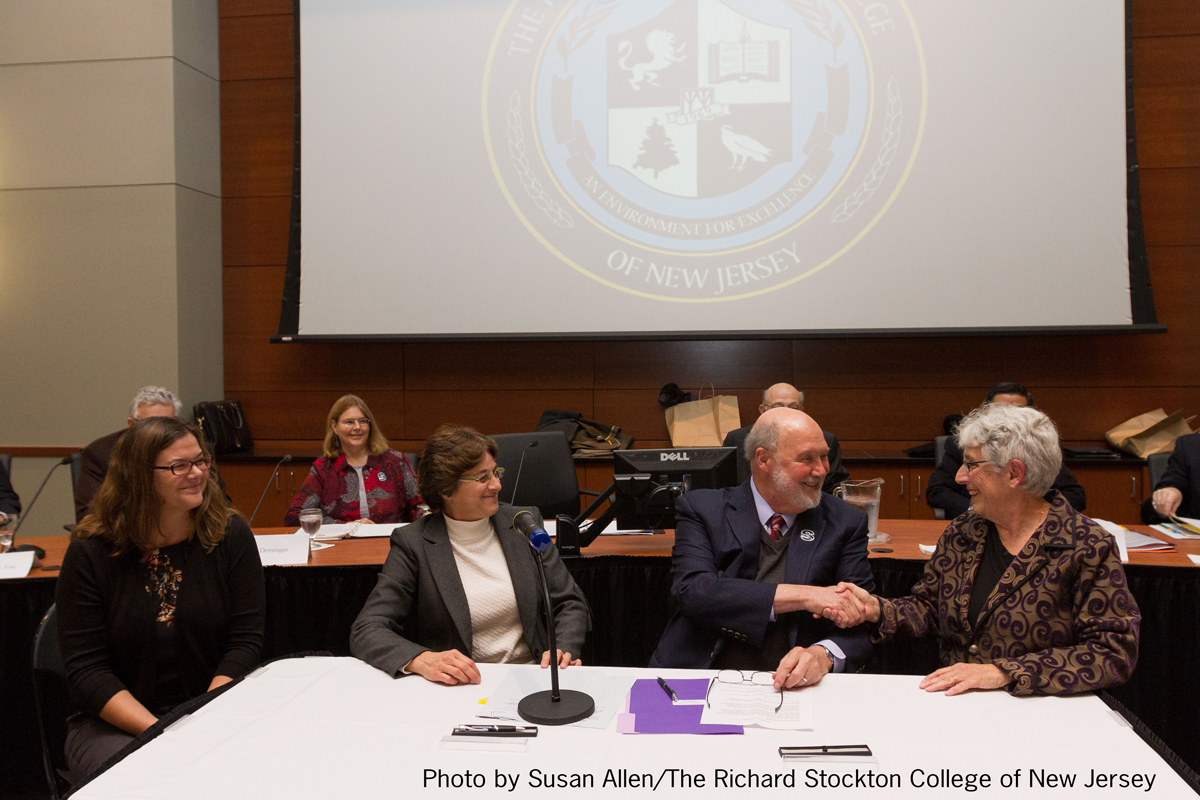 Dr. Lisa Ferguson, left, director of research and conservation at The Wetlands Institute, Dr. Lenore Tedesco, executive director of The Wetlands Institute, Stockton President Herman Saatkamp and Anne Galli, right, secretary of institute’s Board of Trustees, participate in the signing of the agreement that will allow the two institutions to expand their collaboration on education and research programs.