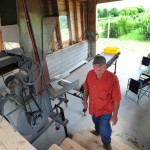 As a third-generation farmer who can trace his genealogical roots to the 1600s, Dave Van Vorst has had an almost innate sense of the loamy soil and salt-tinged air that make the skinny peninsula of Cape May County a unique growing region.

And over the years the 67-year-old farmer had certainly grown plenty of crops – corn, lima beans, hay – on his nearby Petersburg property.

But it was the fickle beach plum that helped him discover his true connection to the land.

“I’ve really been inspired by these beach plums,” Van Vorst said as he prepared his 31/2-acre orchard off Route 9 in Ocean View for harvest. “Growing them is almost like taking a weed and turning it into a viable crop.”

Van Vorst gazed at several hundred specimens that had started out as “little sticks” on a property owned by his best friend and business partner in the venture, Curtis Townsend Corson. Just beyond the rows – some 10-foot-tall trees so gangly that they need to be trellised, others low shrubs – lollipop-colored umbrellas dotted a Strathmere beach about three miles to the east, a reminder of the development that almost did in the native plant.

Turning beach plums into a viable crop is the goal of the Cape May County Beach Plum Association, which Van Vorst serves as president. The 55-member nonprofit group was established in 2005 to research, cultivate, and promote the fruit of Prunus maritima.

The native species, first spotted by explorer Giovanni da Verrazzano in 1524, is found along the coast from Maine to Virginia. It produces fruit in an on-again, off-again annual pattern. Coast dwellers have harvested beach plums for jellies and preserves for centuries. Now researchers say the plant could help stabilize constructed dunes in beach-replenishment projects.

While farmers in the region have had success domesticating native blueberries, cranberries, and Concord grapes, the beach plum has remained elusive to commercial cultivation, said Jenny S. Carleo, agricultural and resource management agent for the Rutgers Cooperative Extension of Cape May County.

While some people do snack on the purple, large-pitted fruit – which isn’t as juicy as domesticated varieties – homemakers long ago discovered that boiling down the tart plums produced tasty jams. On a commercial basis, boutique canners have been able to produce only small batches, mostly as beach souvenirs, because of the crop’s unpredictability.