The Return of The Osprey 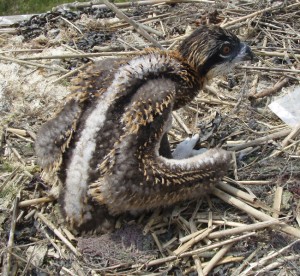 This summer, we are excited that a young osprey pair has taken up residence on the Institute’s Osprey platform that has the nest cam. We have all been monitoring the daily nest activities and chick rearing, both day and night, from our live osprey feed.

The Osprey nest platform had not been used since the summer of 2011, when the nest material was blown out of the nest platform by Hurricane Irene after the chicks had fledged. In 2012, and the subsequent years, the camera platform was not utilized, but surrounding platforms were.

The return of the Osprey is an amazing story and remains one of the great conservation stories of our time. Ospreys, Eagles, Peregrine Falcons, and many other top predators fell victim to the effects of DDT. DDT was being used to manage insects but had a catastrophic effect on the reproductive success of these majestic birds. Historically, before the effects of DDT caused the state’s osprey population to decline, there were more than 500 osprey nests in NJ. The combination of habitat loss caused by extensive coastal development and reproductive failure due to food chain poisoning, caused osprey populations to plummet. By 1974, only 50 nests remained in NJ, and the osprey was listed as endangered in the State of NJ. Similar declines were being reported throughout their North American range. 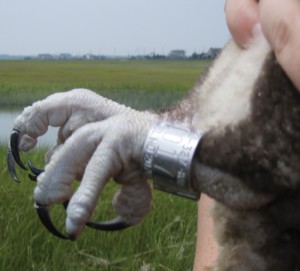 Thanks to work by dedicated conservationists, researchers, and attorneys, armed with public awareness sparked by Rachel Carson’s seminal book Silent Spring, DDT was banned in 1972. The Institute has a long and proud history of research and conservation related to osprey. Joseph Jacobs, a founding member of the Board of Trustees of the Institute, worked tirelessly on osprey conservation. An article in the Seven Mile Beach Reporter dated July 10, 1964; entitled “Bands 35 Ospreys in Avalon Section” highlights some of Joe’s work banding nestlings at various Stone Harbor sites and on Cedar Island in Avalon. He was licensed for bird banding by the US Dept. of the Interior and banded birds in the area from more than 2 decades. Joe believed that the local area was the last strong nesting site for osprey because it gave the bird easy access to waters where the fish on which they feed are plentiful and the effects of DDT were not as severe as in more populated areas.

Joe Jacobs pioneered the use of nesting platforms. Prior to the nesting platforms, osprey were nesting on the tops of the telephone poles along Stone Harbor Blvd and with the increase in traffic and the DDT problems, the nests numbers were declining. One day in the early 1970’s, Joe, who was a builder by trade, took the materials for a platform into the marsh and erected what he felt would be a site attractive to a nesting pair, and walked back to his car. When he reached the road, he turned back to look at the platform and was thrilled to see that an osprey had already found it. The rest is history —since the first one was a success, he continued to erect others, both in the Stone Harbor and Avalon areas where he had usually banded the nestlings. Artificial nest platforms are now the predominant conservation measure to encourage and aid osprey nesting throughout their range. 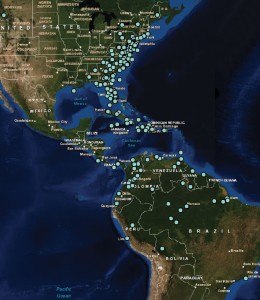 There are 5 Osprey nest locations within view of the Institute and the Osprey Learning Station at the Institute provides lots of great information collected by the state’s osprey banding programs. Since 1926, 279 of the 358 osprey banded near Cape May County have been sighted in 18 different countries. The oldest osprey on local record was banded in 1957, encountered and released alive in 1979 at a nest in the same vicinity, and lived at least 22 years.

We are watching the chick in the osprey nest behind the Institute. The chick is growing rapidly and we have hopes for a successful fledging in a few weeks – perhaps by the time this newsletter reaches you.

The osprey recovery in NJ – and especially in the marshes in Cape May – is one of the great conservation stories of our lifetime. Next time you see these majestic birds, or hear their chirps, remember that it was active conservation that has returned them to their former glory. They are a great example of how we can coexist with wildlife and how the work of a few can be a sea change.