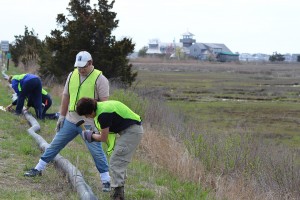 Stone Harbor, NJ, Monday May 4, 2015 – The employees of Burke Subaru and their families were up early with their gloves on and sleeves rolled up to help protect the beloved Terrapin turtles at their Subaru Share the Love event on Sunday, May 3rd.  Ray Burke, President of Burke Motor Group and Chairman of the Board of The Wetlands Institute said, “We wanted to give back to this community we love so we enlisted the help of The Wetlands Institute knowing that they could lead a volunteer project that would have real impact.” 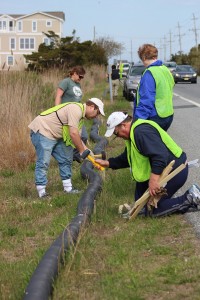 The Wetlands Institute has been working to protect and conserve diamondback terrapins for more than 20 years.  A key component is the installation and maintenance of barrier fencing throughout local salt marsh roads. From mid-May through July, female terrapins leave the marsh in search of higher ground to nest and lay eggs.  This puts them in harm’s way as they cross roadways. Burke Subaru and Subaru America donated more than $4,000 to The Wetlands Institute as part of the Subaru Share the Love program.  The program also included a volunteer event to help The Wetlands Institute repair barrier fencing to prepare for the upcoming nesting season. For several hours, volunteers worked hard repairing the barrier fencing along Stone Harbor Boulevard. Volunteers from both Burke Motor Group and the Rotary Club of Mid Jersey Cape repaired fencing and did a trash cleanup. A bike patrol and roadside assistance helped make the event run smoothly. “Barrier fencing has been shown to be highly effective at reducing mortality of adult terrapins.  Diamondback terrapins are a keystone species in the marsh that provide critical services to help protect and sustain a healthy marsh ecosystem.  Their populations are in decline throughout their range, and this work is critical to helping reduce their mortality”, says Executive 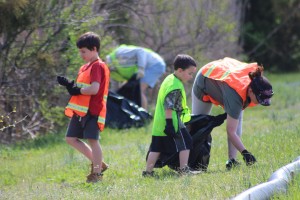 Director Lenore Tedesco, Ph.D. “Last year we had more than 500 nesting terrapins killed along local roadways, so it’s critical that everyone do their part and slow down and be aware.” The Wetlands Institute conducts road patrols to rescue terrapins on roadways, help injured terrapins, and for those that are killed, eggs are retrieved, incubated and hatched.  Hatchlings are fostered for their first year of life and then released back into the marsh to try to help offset the losses on roadways.  After such a harsh winter, the fencing was in need of repair and the Burke Subaru volunteers got the job done and even cleaned up the litter along the way. 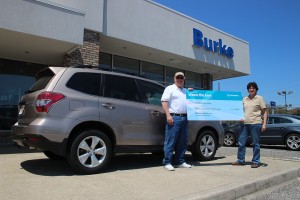 The Burke Family has owned and operated in Cape May County since Raymond Burke, Sr. opened the original Wildwood location in 1912.  Spanning four generations, the Burke Dealerships have grown and expanded to meet the changing automotive needs of the Jersey Cape area. For more than 100 years, the four generations of Burkes have shown their commitment to the community. “Creating and participating in community projects is a Burke family tradition. We all felt great about actually doing something to preserve and protect these beautiful native creatures”, says Burke.  Event coordination was by Francey Burke.

About The Wetlands Institute:

The Wetlands Institute is a not-for-profit organization dedicated to promoting appreciation, understanding and stewardship of wetlands and coastal ecosystems through our programs in research, conservation and education. We inspire visitors of all ages to appreciate and steward wetlands and coastal ecosystems by teaching them the importance of those systems and how they relate to their own lives. Visit our website at wetlandsinstitute.org to find out more about our programs and mission.